Numinous is defined as “filled with the sense of the presence of a divinity.” (“Numinous.” Merriam-Webster. Merriam-Webster, n.d. Web. 14 Sept. 2013.) It was mentioned in the novel by Consortium facilitator Laurence Knowlton as he watched the video he is supposed to publish made by “the Shade”. The word numinous is used here because the video is giving Knowlton the sense that there is some higher power at work. “….the camera plunged down through the surface of the illuminated water to view the silt-covered floor of the cavern.”

Silt is a substance like sand, soil, or mud, that is carried by flowing water and that sinks to the bottom of a river or pond, (“Silt.” Merriam-Webster. Merriam-Webster, n.d. Web. 14 Sept. 2013). Silt is used to describe the cavern floor of the site where “the Shade” filmed his video.

“the date was tomorrow”

Tomorrow, March 19th, is when the Shade will supposedly release his virus into the world. That makes “today” in the novel March 18th. This is significant because on March 18th, 1314 the last Grand Master of the Knights Templar,Jacques de Molay, was burned at the stake. This is significant because it connects Inferno to previous Dan Brown novels featuring Robert Langdon. The Knights Templar played a huge role in The DaVinci Code. They were also connected to the Freemasons who were a big part of The Lost Symbol. (Credit for the discovery of this connection goes to Professor Thomas Beyer at Middlebury College).

Helium is a gas, number two on the periodic table. Balloons, for example, are generally inflated using Helium. In the novel, the balloon that holds whatever “Inferno” the Shade wants to release is not helium, but something else.

“…but with some kind of gelatinous, yellow-brown liquid.”

Gelatinous refers to something resembling with gelatin or jelly. (“Gelatinous.” Merriam-Webster. Merriam-Webster, n.d. Web. 14 Sept. 2013.) The substance contained inside the balloon looks, according to Knowlton, like it is gelatinous.

Amorphous refers to something that has “no apparent shape or organization. (“Amorphous.” Merriam-Webster. Merriam-Webster, n.d. Web. 14 Sept. 2013.) Here, Knowlton is describing to us a bag that looks like it has no structure or real shape, making it all the more mysterious.

“Instead of a nose, the man had a long beak….as if he were half bird” 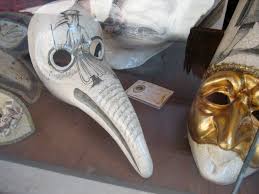 This quote refers to the fact that the Shade is wearing a Venice mask to hide his true identity.

When someone speaks with eloquence it means that they are speaking forcefully and persuasively. (“Eloquence.” Merriam-Webster. Merriam-Webster, n.d. Web. 14 Sept. 2013.) There are no mistakes or pauses in speech. This sentence refers to how Knowlton hears the Shade speak in his video.

Inferno is the name that the Shade gives whatever substance is in that bag. It is also the name that Dante gives the first section of his three part poem called The Divine Comedy telling the story of his decent into hell (Inferno), his climb through purgatory (Purgatorio), and his accent into Heaven (Paradiso). The Shade is comparing the substance in the bag to Dante’s Inferno by insinuating that it will lead humans through purgatory into a better world, paradise.

“Forgive them, you might say, for they know not what they do.”

This quote is based off of Luke 23:34  “ Then said Jesus, Father, forgive them; for they know not what they do.” Here the Shade is saying that we could ask for forgiveness, but that it will not be enough this time around. This time humans can no longer be ignorant.

“…a moment when only wisdom has the power to absolve“

To absolve is “to give forgiveness to (someone who has sinned) or for (a sin)”  (“Absolve.” Merriam-Webster. Merriam-Webster, n.d. Web. 14 Sept. 2013.) The Shade believes that humans have sinned, and that only wisdom (as in his) will be enough to save us.

“…I have bequeathed to you all the gift of Hope…”

To bequeath is “to give (ideas, knowledge, etc.) to (younger people) as part of their history” (“Bequeath.” Merriam-Webster. Merriam-Webster, n.d. Web. 14 Sept. 2013.) The Shade is trying to say that he is giving humans a way out, a way to save our race.

“…of salvation, of tomorrow.”

Salvation is “deliverance from the power and effects of sin”. (“Salvation.” Merriam-Webster. Merriam-Webster, n.d. Web. 14 Sept. 2013.) Here, the Shade is saying that he is delivering us from evil, and giving us a hope of a better tomorrow. Clerics refers to a group of leaders who are the leaders in their religion. The roles of such clerics varies depending on what religion they are a part of. However, in the Shade’s speech they serve as a metaphor for those who would disagree with and tried to stop the Shade from going through with his plan. “the silver-haired beauty who dares call me a monster!”

“…the death of Copernicus“

Copernicus was the was the first astronomer to hypothesize that the universe did not revolve around the earth as everyone believed. But that it revolved around the sun. Copernicus was persecuted by the clerics for this theory.

The Shade brings up Copernicus as a metaphor for himself and his struggles for people to understand that, like Copernicus’ severly radical theory, the Shades’ is also being discounted by those in power.