Langdon and Sienna travel on to make an escape from Brüder’s troops.

Dante Alighieri-Dante Alighieri was an Italian poet who lived from 1265 until 1321.  He is most notable for his work, The Divine Comedy.  In Dan Brown’s Inferno, Langdon recollects Dante, who “had been born in Florence, grew up in Florence, fell in love, according to legend, with Beatrice in Florence, and was cruelly exiled from his home in Florence, destined to wander the Italian countryside for years” (Brown).

Beatrice Portinari-Beatrice Portinari is known as the woman whom Dante loved.  She appeared in numerous accounts of Dante’s work, most notably, The Divine Comedy, in which she appears as a one of Dante’s guides.  In Brown’s Inferno, Langdon recollects Dante’s relationship to Beatrice.

Porta Romana-The Porta Romana was the original city gate to Milan, Italy.  In Brown’s Inferno, Langdon and Sienna attempt to escape from Brüder’s troops to this location.  However, as they soon discover, their passage is blocked, and they are temporarily unable to pass.

Dante Alighieri Vienna-Dante Alighieri Vienna is a society dedicated to Dante Alighieri. Members of this society claim that Dante is the “Father of the Italian Language.”  According to Wikipedia, the purpose of this society is to “promote the study of the Italian language and culture throughout the world…a purpose independent of political ideologies, national or ethnic origins or religious beliefs, and that the Society is the free association of people – not just Italians – but all people everywhere who are united by their love for the Italian languages and culture and the spirit of universal humanism that these represent.”

Langdon recalls giving a lecture to this specific society.

Lukas Troberg-A contemporary artist.  In Dan Brown’s Inferno, when Langdon enters the lecture hall to give a lecture to the Dante Alighieri Society, he encounters artwork by Lukas Troberg.  The artwork he notices is of five painted words on the back wall that read, “WHAT IF GOD WAS WRONG?”  Professor Beyer would like to note that the use of the subjunctive is incorrect in this sentence.  To be grammatically correct, the sentence would have to read, “What if God were wrong?”

Cabaret-Cabaret is a famous musical that appeared on Broadway for numerous years.  The plot “revolves around the 19-year-old English cabaret performer Sally Bowles and her relationship with the young American writer Cliff Bradshaw” (Wikipedia).  In Inferno, Langdon recalls a lecture he gave to the Dante Alighieri Society that he opened with “Willkommen, bienvenue, welcome,” a famous line from Cabaret. 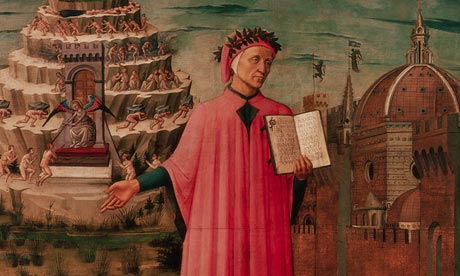 The Last Judgement–The Last Judgement is a Renaissance fresco by Michelangelo that is located on the wall behind the altar in the Sistine Chapel.  It depicts the second coming of Christ and the final judgement by God.  In Langdon’s lecture to the Dante Alighieri Society, he mentions that the inspiration for The Last Judgement was derived from Dante’s Inferno.

Charon-Charon is a ferryman from Dante’s Inferno, who beats his passengers with an oar. Langdon references Charon when giving a lecture to the Dante Alighieri Society.  He notes that Charon appears in Michelangelo’s The Last Judgement.

Image of Haman the Agagite from Michelangelo’s Last Judgement http://sharonscrapbook.blogspot.com/2013_08_25_archive.html

Giorgio Vasari-Vasari was a 16th century Italian artist whose name appears many times throughout Brown’s novel.  In Chapter 18, Langdon refers to Vasari as being obsessed with Dante.  Later in the novel, Langdon’s deciphering of catrovacer leads to Vasari’s Battaglia di Marciano.

Gustave Doré-Doré was a 19th century French artist who specialized in wood engravings.  In Langdon’s lecture to the Dante Alighieri Society, he presents one of Doré’s lithographs that reads “ABANDON ALL HOPE, YE WHO ENTER HERE.”

cappuccio–A type of headwear characterized by being tight-fitting and having ear flaps. According to Langdon in his speech to the Dante Alighieri Society, Dante wears a red cappuccio in nearly all of his portraits. Other Chapter 18 Annotations From Professor Beyer:

Langdon is ³eidetic² since childhood.

³No city of earth was more closely tied to Dante than Florence.²

³You shall leave everything you love most. . . . . .This is the arrow
that the bow of exile shoots first.

You shall leave everything you love most dearly: this is the arrow that the
bow of exile shoots first. You are to know the bitter taste   Thou shalt
abandon everything beloved Most tenderly, and this the arrow is Which first
the bow of banishment shoots forth.

“We can cross the river.” (Brown).
Refers both to the Arno and Dante’s journey into hell by crossing the river

Ponders CATROVACER
And words about death written on top of La Mappa
He wonders if it might be quote from Dante, but it is absolutely not.

The Divine Comedy is called a comedy because it was written in vernacular.

“Throughout all of history, with the sole exception perhaps of Holy Scripture, no single work of writing, art, music, or literature has inspired more tributes, imitations, variations, annotations that The Divine Comedy.” (Brown)

DANTE
by: Michelangelo Buonarroti (1475-1564)
What should be said of him cannot be said;
By too great splendor is his name attended;
To blame is easier than those who him offended,
Than reach the faintest glory round him shed.
This man descended to the doomed and dead
For our instruction; then to God ascended;
Heaven opened wide to him its portals splendid,
Who from his country’s, closed against him, fled.
Ungrateful land! To its own prejudice
Nurse of his fortunes; and this showeth well
That the most perfect most of grief shall see.
Among a thousand proofs let one suffice,
That as his exile hath no parallel,
Ne’er walked the earth a greater man than he.
Translated into English by H.W. Longfellow (1807-1882).