Retaining walls are structures used to prevent an unnatural man made slope from collapsing. The Palazzo Pitti is a Renaissance palace located in the Bolbi Gardens. The original part of the palace was built in 1458 for Luca Pitti and was used as his residence. In 1549 it was bought by the Medici family and over the years acquired a vast array of paintings and other forms of art.

Niccoló Triboli was an Italian Mannerist artist in service to the Medici family. Many of his works are in the Bolbi Gardens.

Giorgio Vasari was an Italian painter, architect, writer and historian. His works include the painting of Battaglia di Marciano in the Palazzo Vechio. In Inferno this is the painting that hides the words “CATROVACER” on it. 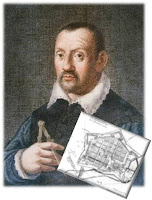 Bernardo Buontalenti was an Italian stage designer, architect, theatrical designer, military engineer, and artist. Some of his works reside in the Boboli Gardens.

Malebolge is the eight circle of Hell in Dante Alighieri’s Inferno. Malebolge roughly translates to “evil ditches” where different sinners are punished according to their sins. These ditches are reserved for counterfeiters, hypocrites, grafters, seducers, sorcerers, and simonists.

We find out that CATROVACER is actually CERCA TROVA which means “Seek and ye shall find”. This explains Langdon’s memory of Dr. Sinskey saying seek and find.

This painting depicts the defeat of the Republic of Sienna against the Duchy of Florence in 1554. This painting by Giorgio Vasari hides the words “Catro Vacer”.

Hall of the Five Hundred

The Hall of Five Hundred set in the Palazzo Vechio served as the seat for the 500 members of Grand Council for the Republic of Florence. The Hall contained many famous works that were lost in its transformation into a council chamber. The Battaglia di Marciano is located in the Hall.

We find out that Langdon wasn’t saying “very sorry”, but Vasari as in Giorgio Vasari.