located on the seacoast of New Hampshire and from the 1930s to the 1960s, was the home to “45 stake-winning thoroughbred race horses”, including Dancer’s Image (winner of the Kentucky Derby). Runnymede is now home to the Friesian horse, a rare horse imported from Holland, known for its “long flowing manes, feathered feet and a natural high stepping trot”.

Volto Intero– Volto Intero is a facemask used during the Carnival of Venice, which is held every year in Venice, Italy. Venetian masks are a “main feature” of the carnival, and “they can be made of leather, porcelain, or with the original glass technique”. Nowadays, Venetian masks are made with the application of “gesso and gold leaf” and are hand-painted. In Dan Brown’s Inferno, Langdon attends a wedding reception where “riders performed in dazzling Venetian costumes with their faces hidden behind volto intero masks” (Brown 317). 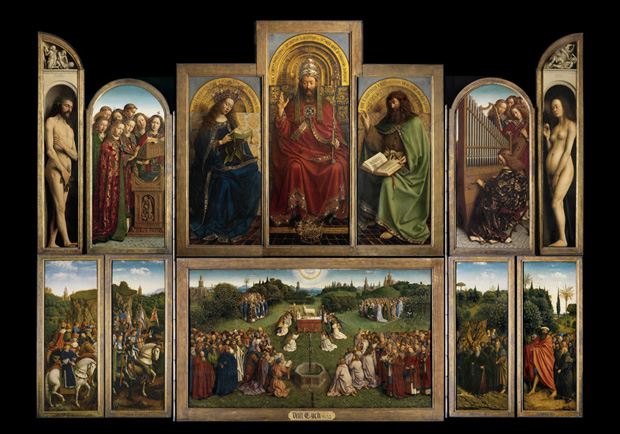 brother Jan van Eyck between 1430 and 1432. The Ghent Altarpiece is also known as the Lamb of God, and is comprised of twelve panels, eight of which are “hinged shutters”. The panels contain paintings of the Anunciation of Mary, John the Baptist, John the Evangelist, portraits of Joost Vijdt and Lysbette Borluut, Christ the King, the Virgin Mary, and Adam and Eve, and ultimately display “adoration of the Lamb of God”, “overseen by the dove of the Holy Spirit”.

Chios– Chios is the fifth largest Greek island and is located in the Aegean Sea, 7 kilometers off the Anatolian Coast. The Chios Straight separates the island from Turkey. The island of Chios is known for its export of mastic gum, also known as “the tears of Chios”, which is a sun-dried resin that is chewed as gum and has a “cedar-like flavor”.  In Dan Brown’s Inferno, the four copper horses that Langdon had seen “had been cast in the fourth century by an unknown Greek sculptor on the island of Chios” (Brown 318).

Theodosian law code, the construction of the Theodosian walls of Constantinople, and the outbreak of massive Christological controversies. Theodosius II was the youngest person everto be Roman Emperor, as he was appointed when he was only seven years old. Theodosius II was married to Aelia Eudocia, a Greek woman, and had a daughter with her named Licinia Eudoxia. 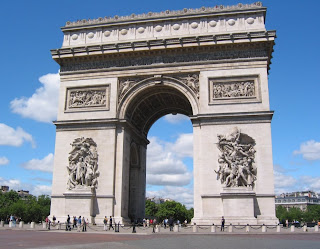 monuments in Paris, which honors those who died for France in the French Revolution and Napoleonic Wars. The names of the French victories and generals are inscribed on the inside and outside of the surfaces of the arc. The Arc de Triomphe was commissioned in 1806 and in 1810 Napoleon had a “wooden mock up” constructed. The Arc de Triomphe is located in the center of the Place of Charles de Gaulle, and contains the tomb of the Unknown Soldier from World War I beneath its vault.