Cortile is the Italian word for the English “courtyard”. According to the Britannica encyclopedia, a cortile is “an internal court surrounded by an arcade”. Cortiles are often found in Italian palaces and were first built during the Renaissance. Robert Langdon and Sienna “hurried through the cortile” of the Pitti Palace” (Brown 121).

Rubbernecking is “the act of gawking at something of interest”. The term “rubberneck” refers to the “craning” of a person’s neck, often times in order to get a better view of an accident. The word was first used in the 1890s by H.L Mencken, an American journalist and satirist, to describe tourists.

The word phalanx is a term used to describe ancient Greek warfare. It is derived from the Greek word phalanx, meaning finger. According to the Merriam Webster dictionary, it is a “body of heavily armed infantry”.  Today, the term is used to describe a formation of army troops or an organized group of people.

Giotto’s bell tower, also known as Giotto’s campanile, is part of a complex of buildings that make up the Piazza del Duomo in Florence, Italy. Giotto’s bell tower is 84.7 meters tall and is divided into five levels. Giotti di Bondone first began designing the bell tower in 1334 and as a result became one of the “founding fathers of Italian Renaissance architecture”.

A maze garden or a “hedge maze” is “an outdoor garden maze in which the walls between passages are made of vertical hedges”. The first hedge mazes were used in the mid 16th century during the Renaissance in Europe.

Braccio di Bartolo, also known as “Morgante”, was the favorite court dwarf of Cosimo I de Medici. There are three portraits of Morgante in Florence. One of them is the Fountain of Backus, which Langdon and Sienna encountered in the Boboli Gardens near the entrance of the Vasari Corridor. The fountain depicts Morgante as “an obese, naked dwarf straddling a giant turtle” (Brown 123).

A cul-de-sac, literally meaning “back of the bag” in French, is “a street that is designed to connect to another street only at one end” (Merriam-Webster Dictionary). The purpose of cul-de-sacs in residential areas is to limit through-traffic and is seen as an example of “filtered permeability”. Sienna “sensed that their long journey was about to terminate” because she and Langdon were dashing into a “cul-de-sac” when running from the drone (Brown 124). 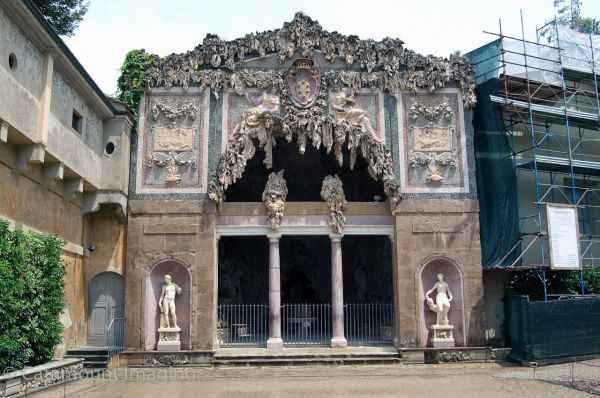 A grotto is “any type of natural or artificial cave that is associated with modern, historic, or prehistoric use by humans”. Natural grottos are often located near water and are flooded at high tide. Some of the most famous grottoes in the world are the two grottoes begun by Vasari, located in the Boboli Gardens. The grotto that Langdon and Siennaencountered in the Boboli Gardens had “dagger-like stalactites” and “oozing geological features twisted and dripped down the walls” (Brown 124).