Smalti Tiles : are “opaque glass tiles that were originally developed for use in mosaics”(wikkipedia.org). Mosaics are images assorted from small and colored pieces of glass or tile (Mosaic). In Dan Brown’s Inferno, the mosaics in the Florence Baptistry are complied of these smalti tiles. Rome’s Pantheon : Commissioned by Marcus Agrippa, the Pantheon of Rome is located in Rome, Italy and is a temple built to worship the Gods. Pantheon is an ancient Greek word meaning “All Gods.” The building has a circular structure with a portico(porch) of large columns supporting a triangular structure called a pediment.  “Almost two thousand years after it was built, the Pantheon’s dome is still the world’s largest unreinforced concrete dome”(wikkipedia.org). Dan Brown mentions this pantheon because there are many similarities between the construction of the overlapping domes of The Florence Baptistry and the Pantheon of Rome(Pantheon of Rome).

Jesus Christ : is the “central figure of Christianity.” Christians believe Jesus is the son of God and was conceived by the Holy Spirit. The Holy Spirit is the third divine person of the Holy Trinity. The Holy Trinity is the Father, Son, and the Holy Spirit. Each person itself of the Holy Trinity is God. After He was conceived by the Holy Spirit, he was born of a virgin (Mary of Nazareth). As a man, He founded the Church, performed various miracles, died on the cross as atonement for the sins of humanity, rose from the dead, and ascended into heaven. He is seated at the right hand of the father but Christians believe “he will come again in glory to judge the living and the dead, and his kingdom will have no end”(biblical passage). Baptism: is a “sacrament and ordinance of Jesus Christ as well as a Christian rite of admission and adoption […] into the Christian Church”(wikkipedia.org). Baptism either involves complete submersion of the individual in water or the individual kneeling in water while water is being poured over their head. Christians view baptisms as a purification ritual and deem it necessary for eternal salvation.

Baptismal font : is an article of church furniture […] used for the baptism of children and adults. Fonts may be constructed out of marble, wood, or metal. This is where infants are baptized and in Dan Brown’s Inferno, this is where the death mask of Dante is hidden.

Antipope John XXIII : was an antipope because the Catholic Church did not view him as the “legitimately elected pope”(Antipope) who was the rightful successor of Saint Peter. Antipope John XXIII was persecuted by the Church for various crimes but found a safe haven with the Medici family in Florence. He is buried in the Florence Baptistery, also referred to as the Bapristery of St. John, and his tomb was built by Donatello and Michelozzo(Antipope Tomb).

Florence Baptistery (“Gates of Paradise”) : This religious building is located in Florence, Italy, and it is one of the oldest building in the city. Dante and other famous Renaissance figures were baptized here. The Baptistery is very well known for its bronze doors. The south doors were completed by Andrea Pisano and the north and east doors by Lorenzo Ghiberti. Michelangelo referred to the east doors as the “Gates of Paradise” and this name has withstood the passage of time. The “Gates of Paradise” is a fitting name as the bronze doors depict ten scenes from the Old Testament including the “Last Judgment, the Stories of John the Baptist, the Story of Joseph, and the Stories of Genesis”(Gates of Paradise). 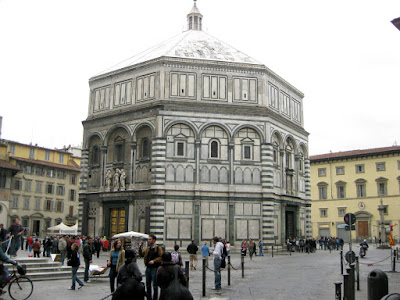