Shade – A Shade is the soul of a dead person who resides in one of the nine circles of hell in Dante Alighieri’s Inferno.  Shades are weightless, but unlike the common perception of ghosts, shades are neither translucent nor penetrable.

River Arno – The Arno river runs West across central Italy, originating in the Apennine mountains.  The river passes through the city of Florence, traveling underneath the Ponte Vecchio and Santa Trinita bridges. Via Dei Castellani – A street in Florence adjacent and perpendicular to the River Arno. The Uffizi in Florence

Uffizi – The Uffizi is an extremely famous museum in Florence.  Giorgio Vasari designed the building as offices for magistrates, and began construction in 1560.  Construction was completed in 1581 by Bernardo Buontalenti and Alfonso Parigi. In 1765 it was then opened to the public as a museum. Uffizi is the Italian word for offices.

Purgatory – Purgatory is where dead souls who have not committed serious sins may go to cleanse their soul before going to Heaven.  Purgatory is mainly linked to the Catholic Church.

Chthonic Monster – The chthonic monster is a reference to Medusa, a character in Greek Mythology.  Medusa is depicted as an ugly woman with snakes for hair, and it is believed that any person who looks at Medusa’s face directly will turn to stone. Apennine Mountains – The Apennine mountains are a range of mountains that span the majority of the Apennine Peninsula in Italy.  The range is split up into three sub-ranges: Northern, Central, and Southern.

Palazzo – Palazzo is an italian word which is used to describe “any urban building built as a grand residence”. It is common that the first floor of a palazzo is used as a shop or store.

Dawn – Dawn is the period of time each morning where the sun is not yet visible above the horizon, but “weak light” begins to illuminate the world.  This is also known as twilight.

Crenellated – A crenellated wall is a defensive wall that has purposefully been built with crenels, or gaps, cut into the parapet in order to make it easier for soldiers to shoot arrows and throw harmful objects onto nearby attackers.

Vendors – Vendor is a very broad term, used to describe any person or business that is part of a given supply chain.  In Dan Brown’s Inferno, vendor usually references the shops and kiosks in the streets of Florence.

Piazza di San Firenze – An almond-shaped piazza in Florence most notably contained by part of the Palazzo Vecchio.

Lampredotto – Lampredotto “is a typical Florentine peasant dish, made from the fourth and final stomach of a cow”. It is a very popular food item sold in the streets of Florence by small vendors. The Bargello – The Bargello is a building in Florence that used to be a prison, but was converted into an art museum in 1865.

Spire – A spire is a man-made tower-like feature that resides on the roof of a building.  Commonly found on churches, a spire generally is in the shape of a cone.  Spires represent reaching towards the shy in religion, and also display the wealth and power behind the building of a given spire. The Badia in Florence

The Badia – Also known as the Badia Fiorentina, the Badia is where the Fraternity of Jerusalem resides in Florence.  The Badia is also used as a church and abbey.

Gluttonous – Gluttony is one of the seven deadly sins, where the offender consumes too much and doesn’t share with the poor. Satan – Satan is the devil that rules Hell in Christianity, and convinces humans to disobey God.  In Dante’s Inferno, Satan is depicted as a three headed creature with massive bat wings, breathing freezing air out of all three mouthes.

Virgil – Also known as Publius Vergilius Maro, Virgil is widely known as one of the greatest poets in Roman history.  Virgil is most famous for his epic poem Aeneid.  After Virgil’s death, his character appears in The Divine Comedy as Dante’s guide through hell and purgatory. 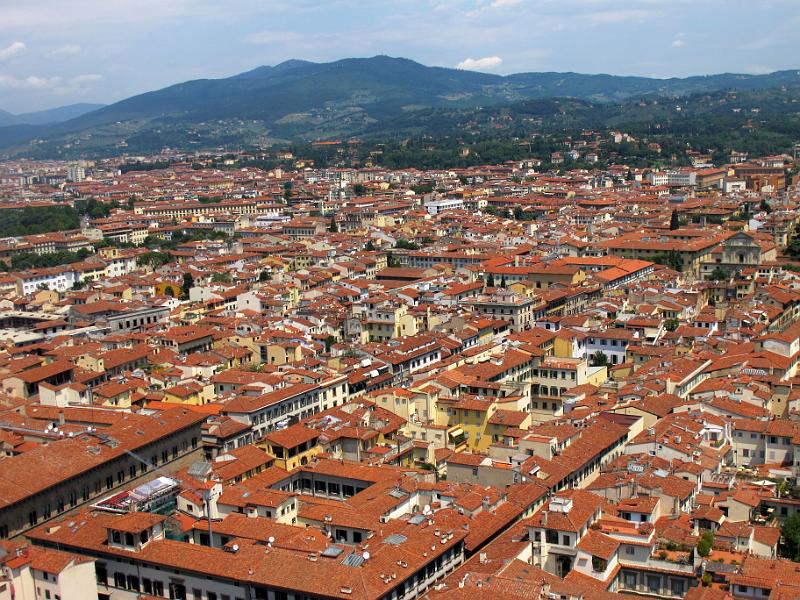 Giotto – Also known as Giotto di Bondone, Giotto lived during the Middle Ages in Florence.  He was an architect and painter, known best for decorating the Scrovegni Chapel.

Donatello – Also known as Donato di Niccolo di Betto Bardi, Donatello is famous for his sculptures during the Renaissance, and his bas-relief work.

Brunelleschi – Brunelleschi is best known for his design of the Florence Cathedral Dome. He  was an engineer and architect from Florence.  Brunelleschi is credited with the invention of perspective, which is a style of drawing where the picture looks the way it appears in real life.

Michelangelo – Michelangelo was one of the most influential individuals during the Renaissance, working in many different disciplines.  His most famous sculpture is David, and he also painted The Last Judgement in the Sistine Chapel.

Botticelli – Botticelli was a part of the Florentine School during the renaissance, where he was a painter.  His most famous paintings are Primavera and The Birth of Venus.

Cobblestone – A cobblestone road is comprised of many large pebbles laid down next to each other in order to create a street suitable for horse carriages. In between each cobble there is cement or sand holding the cobbles in place.

Piazza – Piazza is the Italian word for city square.  A piazza commonly has shops lining it, with multiple streets converging at the piazza. In Italy, piazzas serve as central hubs in cities.

Lagoon – As it pertains to Dan Brown’s Inferno, lagoon is defined as “a shallow artificial pool or pond (as for the processing of sewage or storage of liquid)” (Merriam-Webster)

Inferno – Dante Alighieri’s Inferno is the story of Dante’s journey through the nine rings of Hell, and is the first of three sections in the epic The Divine Comedy.