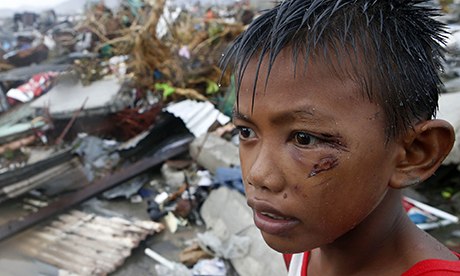 Typhoon Haiyan. From The Guardian

In the aftermath of global natural disasters like Hurricane Sandy and now Typhoon Haiyan, one of the questions that has been brought up several times is: are these disasters “caused” by global climate change?  Technically, Gov. Chris Christie was right when he said earlier this year that “[there hasn’t] been any proof thus far that Sandy was caused by climate change.”

For one thing, it’s been so far impossible to prove that a single storm event, like Sandy, Katrina, Irene, or Haiyan is directly caused by warming global temperatures.  While the IPCC reports (PDF) that the average wind speeds in cyclones is likely to increase, and the Proceedings of the National Academy of Sciences asserts that we are likely to have up to 20 additional hurricanes and tropical storms each year by the end of the century due to global warming, a group of researchers from NOAA, MIT, the Centre for Australian Weather and others have also (PDF) shown that observed changes in cyclone activity may still be within normal variability.  In short, while it is possible – maybe even probable – that humans have changed global storm systems, we cannot definitively show that human activities and anthropogenic warming have had a detectable impact on observed storm activity.  Of course, as the video below shows, Haiyan has been one of the biggest storms ever observed.

So, what does this mean?  If you were uncharitable, I suppose you could continue to claim that, since there is no definitive proof that anthropogenic climate change is causing harm beyond normal variance, that the current global deadlock on fighting global warming is no big deal.  After all, if we can’t prove a causal relationship, we don’t have to justify potentially costly mitigation and adaptation efforts.

Ships washed up in the Philippines

However, the Philippines government has not taken this approach.  On Monday, the head of the Philippine delegation to the UNFCCC, which launches its 19th annual meeting today in Warsaw stated firmly that:  “What my country is going through as a result of this extreme climate event is madness.  The climate crisis is madness. We can stop this madness. Right here in Warsaw.”

For the sake of the Philippines and other vulnerable countries, like the Maldives and Bangladesh, I hope he’s right; that the international society can stop this madness.  We’ll see what turns up this year, as we head once more into an attempt to address one of the most important climate, security, and environmental justice issues of our time.