Kill it With Roundup!

So, the following is absolutely true.  This summer, I decided I was going to start a vegetable garden in my yard, despite having a dubious gardening ethic, no idea what I was doing, and little to no actual tools.  Naturally, I turned to a local expert; a guy who works in agriculture here in Middlebury.  (I can’t say his name, or where he works, because it could be embarrassing – suffice it to say, he should really have known better.  Let’s call him Zeb).

ME: Yeah, so I was thinking of starting a garden.  Maybe a raised bed?  How do I do that?

ZEB: Right, so the first thing you need to do, is clear the ground of grass and weeds where you’re planning to put the bed.  Mark off the area with some string and stakes, then just soak it with RoundUp.

ZEB: Yep!  Just soak it all down.  Spray it right in there, and it’ll clear all those weeds and grass out for ya.  Then, you can put your soil on top of that once they’re all dead, and use that for your vegetable garden.  Easy!

Well, I didn’t particularly want my garden to start off with a chemical assault (it was supposed to be organic!), so I, with no great skill or capability, dug up a small plot, put newspaper over what remained,and went  from there.  But of course, the question remained – what would have happened if I’d used RoundUp in my precious garden?

It turns out (no surprise), that as a herbicide, RoundUp is tremendously tooxic.  One of the main issues is that the studies on the safety of glyphosate, RoundUp’s main ingredient, do not take into consideration the effect of combining glyphosate with the other ingredients, and the resulting chemical cocktail.  For instance, some studies indicate that the “inert” ingredients magnify glyphosate’s potency such that it can affect natal development and hormone production.  Moreover, the term “inert” used to describe ingredients in RoundUp refers only to the fact that they are not usable as herbicides, and is not a pronouncement on ttheir biological impact.  Thus, while glyphosate appears to degrade in the soil relatively quickly, the effect of multiple, potentially toxic chemicals creates a higher risk of poisoning “…not with the active ingredient alone,, but with complex and variable mixtures.”  Personally, I’d rather nottake the chance.  But many people do: RoundUp is the world’s best selling weedkiller, and as long as it remains profitable, it will continue to be produuced for commercial and domestic use. 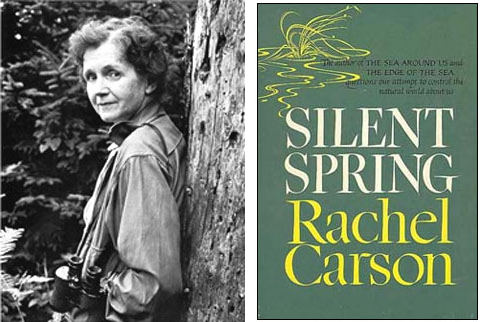 Rachel Carson and Her Masterpiece

This month marks the 50th anniversary of Silent Spring, Rachel Carson’s popular book pointing out the ubiquity and danger of common chemicals used then, and still used now, in pesticides, herbicides, household cleaners, and fungicides.  While Carson did not argue “…that chemical insecticides must never be used,” she did question the wisdom in their indiscriminate use in commonly used products, particularly since much of the chemicals – DDT, lindane, chlordane, dieldrin – are either endocrine disruptors, carcinogenic, or both.

I thought about this book a lot, particularly after a recent Stanford study that is purported to show that organic produce – produce grown without the use of chemical pesticides and the like – is actually not healthier for you than conventional* produce.  Stanford’s own press release on their School of Medicine website proclaims “Little evidence of health benefits from organic food,” a perspective seemingly adopted also by the NYTimes, NPR, and the Baltimore Sun.  The study seems at first glance to be an excellent tool to criticize the organic food movement.  And, to be sure, there is a lot to critique: organic food is usually more expensive than conventional food, and thus out of the budgetary reach of much of the US population.  Further, some of the proponents can verge on faddism and elitism.  Take this tone-deaf article, for example, which states with a straight face that if “…we can find money for movies, ski trips, and recreational cruises, surely we can find the money to purchase integrity food.” The first argument seems to me like a strawman.  The purpose of organic food, as far as I knew, wasn’t to provide more nutrients per kilo – it was to avoid the use of toxic chemicals as much as possible, particularly on goods that we consume.  Second, as explained in this article by Mother Jones, Stanford’s calculation of risk from pesticides in conventional food is methodologically suspect.  The finding that conventional food is only 30% more likely to have chemicals than organic food does not make a distinction in levels of chemicals present; in other words, an organic apple with trace amounts of pesticides is counted as equivalent to a conventional apple with multiple, and high-risk pesticides.  Moreover, although the Stanford study argues that the trace amounts of each chemical is at levels deemed safe by the EPA, it does not take into consideration the potentially harmful effect of combining multiple chemicals at once.

Third, even if we accept the findings that the chemical levels on the food we consume are safe, agricultural runoff and evaporation means the chemicals used can still enter the water cycle.  In a study by the US Geological Survey, more than half the watersheds and sources near agricultural facilities had levels of pesticides “...greater than water-quality benchmarks for aquatic life and (or) fish-eating wildlife.”

So, the use of the Stanford study to argue against organic food is plausible, only if you’re willing to disregard all of the above.  Personally, since chemicals are everywhere, I’d rather not contribute to the further accumulation of toxic compounds in our ecosystem, and our bodies.

*How hilarious is it that food produced with failing antibiotics, toxic chemicals, pesticides and herbicides is considered “conventional,” while food produced in the same way that we’ve done for thousands of years is given a special denominator?