Torden language professionals must meet the Government language requirements, as well as be vetted for security clearances. The qualification process can be lengthy, but can also be accomplished while you are completing your degrees.

Torden’s requirements include Russian and Arabic language professionals to support National Level intelligence requirements from U.S.-based facilities. Their employees are a combination of native linguists and graduates from the nation’s top institutions for foreign languages. They will brief you on their current openings, the security process, and what life is like as a Torden professional.

Lead for America recruits, trains, and places our nation’s most promising young leaders in two-year paid fellowships in local governments as a means of strengthening America’s public institutions, supporting our local communities, and cultivating a new generation of transformational public service leaders.

Over the course of the two years, LFA Fellows will gain a new perspective and appreciation for local government, understand the most pressing issues facing our communities, be equipped with tools to enact communal and systemic change, establish relationships with partner universities and organizations, and gain opportunities to engage with a growing alumni network of passionate leaders, who together will continue to serve as transformational public service leaders in communities across the nation.

A single visionary leader rooted in humility can change a community. Many working together can transform our country.

Apply for the first deadline by November 1st at 11:59 pm.

Searching for a summer internship or job for after graduation? Check out these great opportunities posted in Handshake HERE. They include jobs & internships in the environment & renewable energy, not for profits/NGOs, sustainable food systems, international development, Govt. – state & local, and many more. Deadlines are fast approaching!

Alex Alben is Washington State’s first Chief Privacy Officer, an office created by the state legislature in March of 2015. He coordinates privacy and data policy for the state and consults with the Governor and Legislature on technology issues impacting citizen privacy.

As a technology executive, Alex helped launch ESPN.com and ABCNews.com, and served for six years in senior management at RealNetworks. At the outset of his career, Alben served as a researcher for CBS News covering the 1980 Presidential campaign and went on to work for Mike Wallace at CBS Reports. In the 1990’s, Alben worked as an entertainment lawyer for Orion Pictures and Warner Bros. He was a candidate for the U.S. Congress from Washington State’s 8th Congressional District in 2004.

A graduate of Stanford University and Stanford Law School, Alben writes for The Seattle Times and other publications on the intersection of media, technology and politics. He is the author of Analog Days—How Technology Rewrote Our Future.

As one of only five Chief Privacy Officers in the country, Alex has initiated state-wide programs for enhanced privacy training, consumer education and “Privacy Modeling.” In March of 2017, Gov Tech Magazine named him one of the country’s top “Doers, Dreamers and Drivers” in state government.

Join us in the ADK Library for a small group career conversation. He’s available to talk to students about digital privacy, net neutrality, and exciting opportunities for both tech and non-tech students interested in careers in tech fields!

CCI will be posting this week in Handshake the new NOAA application for any of the dozen or so conservation internships that you can apply to via this link through the National Centers for Coastal Ocean Science. These opportunities are for NOAA’s College-Funded Internship Program which provides undergraduate students summer internship experience in science, policy, and science communication. Middlebury is a partner school and to participate you must apply through Handshake.  There will be up to 5 funded opportunities through Middlebury’s CCI funding process. Keep checking on Handshake throughout the later part of this week. Use keyword “NOAA 2018 Summer Internship” to directly find the instructions about the application process.

Here are a few of the internships to whet your appetite!

Restoring Habitat via community leadership and support (in Hawaii)

Habitat Mapping GIS Project in the Gulf of Mexico (in Mississippi)

The deadline for applications on Handshake will be COB February 14 – but don’t wait to apply! 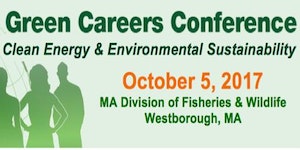 Delve into clean energy, sustainability, and career development for a day. Enjoy cross-sector dialogues with stakeholders from government, business, education, and nonprofits, and career-ready candidates. REGISTER EARLY to reserve a place! Mass Wildlife will provide conference space in their new, nature-friendly, LEED platinum headquarters this year. Parking and seating are limited to ~100. Food and beverage will be local and/or organic.

“For five days with PLEN, I got to really experience and learn what life and careers in Washington, D.C. are at their best and at their worst. Each panel I attended was interesting, eye opening, and life changing.”  -Sivan Nizan, PLEN Alumna

For almost 40 years, the Public Leadership Education Network (PLEN) has brought thousands of women from across the country to Washington, D.C. to explore careers in policy and connect with women leaders. PLEN seminars enhance class work and curriculum by giving students valuable access to women leaders in Washington, D.C. from the legislative, executive, and judicial branches; agencies; nonprofit organizations; and the private sector.  Our programs give students the chance to discuss current policy issues in law, business, nonprofits, STEM, Congress, and the international field; visit institutions and organizations in D.C.; and launch their careers through intimate coaching sessions on networking, resume writing, and salary negotiation. During all seminars, students network with distinguished women at the top of their fields while building connections with their peers from across the country.

Join PLEN in Washington D.C. for our six annual seminars: