If the executive summary of the FBI investigation released by Senate Judiciary Chairman Chuck Grassley accurately captures the underlying FBI findings, it appears that Judge Kavanaugh is on track to be confirmed as the next Supreme Court justice, consistent with what I suggested in my previous post. We may know more regarding how the remaining undecided senators will vote after today’s cloture vote to end debate. If he does get majority support, his confirmation is likely to be on a near-straight party line vote, with most, if not all Senate Democrats voting against him.  It is understandable why they do so, and why Republicans will vote to confirm him.  It also poses potential risks to the future of the Court.

Why do Democrats oppose Kavanaugh if there is no clear evidence to corroborate Dr. Ford’s allegations of sexual assault?  Because he is a Republican, and is unlikely to rule in ways on the Court that most Democrats will find acceptable.  In fact, I suspect this fear has been the primary motivation behind Senate Democrats’ opposition all along. Republicans, of course, are motivated by similar political reasoning. However, because it is still viewed as unseemly to defend one’s confirmation vote on partisan reasoning, senators rarely if ever admit to this motivation.  And, in their defense, it is understandable why.  As an unelected body, the Court’s legitimacy depends in part on the fiction that justices are “priests in robes” who impartially decide cases based on legal reasoning and precedent.   As Judge Kavanaugh said in today’s Wall St. Journal op ed piece, “The Supreme Court must never be viewed as a partisan institution. The justices do not sit on opposite sides of an aisle. They do not caucus in separate rooms. As I have said repeatedly, if confirmed to the court, I would be part of a team of nine, committed to deciding cases according to the Constitution and laws of the United States. I would always strive to be a team player.”

But, of course, the Supreme Court is very much a partisan institution, in the sense that justices’ decisions in legal cases seem to generally fall along distinct ideological lines.   This is not always the case, of course, and other factors do influence judges’ decisions, but it happens enough that political scientists can discern clear voting patterns consistent with a certain ideological viewpoint.  Nonetheless, justices like Kavanaugh continue to insist that they vote in a nonpartisan manner.  As my Syracuse Law Professor and former colleague Keith Bybee argues, that hypocrisy serves a valuable function.   By portraying justices as “neutral” umpires who call “ball and strikes” according to some shared, widely-accepted view of the legal strike zone, it is more likely that the Court’s ruling will be accepted by the majority of people.  The alternative – to view judges as naked partisans – would risk delegitimizing the Court, and making it less likely that partisans from the other side will comply with Court edicts.

Alas, this legal fiction is in danger of being stripped away. As the parties have become better sorted, in which ideology increasingly lines up with party labels, we have seen both political parties engage in tactics designed to win popular support in order to gain an ideological majority on the Court.  This has led to increasingly bitter confirmation fights dating back at least to Reagan’s unsuccessful effort to appoint Judge Robert Bork to the highest court. The bruising battle regarding Kavanaugh’s confirmation is but the latest illustration of this trend.  Senators do so for an understandable reason: the Court, as an important political institution whose members sit for life, has the capacity to influence public policy for years to come. As a result it makes perfect sense to base one’s vote according to a justice’s perceived ideology. However, it is even better if a Senator can clothe that support or opposition in some higher principle – it cannot simply be about politics!  Instead, they claim to be voting on a more important issue: “This is a vote against a racially-based high-tech lynching!”  “This is a vote for women everywhere who have been sexually assaulted!”  Much of the opposition to Kavanaugh seems consistent with this approach, even if the logic seems at times somewhat tenuous.  For example, Democrats’ claim that Kavanaugh’s Senate testimony indicates he lacks the proper judicial temperament seems to ignore what his 11-year record on the bench tells about his judicial “temperament.”  Anyone truly interested in assessing this aspect of his demeanor would be combing his actual judicial behavior across the previous decade, rather than basing a conclusion on what he admits was a deeply emotional response to what he perceived to be as unfounded attacks on his family name.  It certainly suggests that Democrats are not really opposing him because of questions regarding his temperament.

To be sure, senators may even convince themselves that this high-minded principle is their primary motivation.  Even if they do not, it makes perfect political sense to adopt this public posture, if for no other reason than to sway public opinion.  The risk, of course, is that if the argument seems increasingly out of step with the facts, or as a blatant political move (see Republican opposition to Merrick Garland) as perceived by the general public (as opposed to activists on both side) the “principled” stand may impose a political cost.  We shall see if either party pays a price in the upcoming midterms.  Early indications are that the Kavanaugh controversy may have energized Republicans, raising their interest in the midterm election to that of Democrats’.

However, there is a bigger worry.  It is that these partisan-driven confirmation battles pose a long-term risk to the Court’s perceived legitimacy.  In that regard, there is some evidence that approval of the Court has declined in the last two decades, at least as measured by survey data. 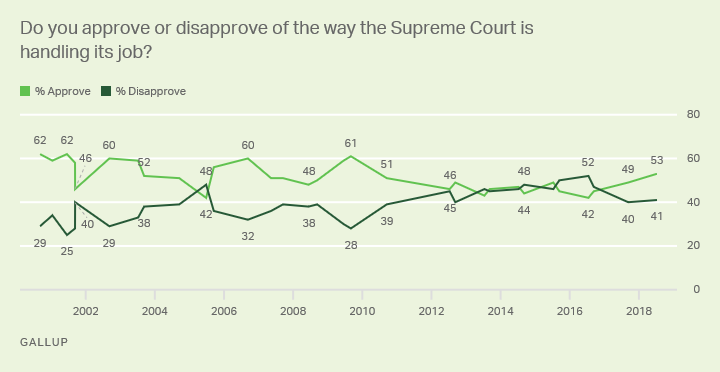 So far, however, that disapproval has not manifested itself in outright refusal to abide by the Court’s rulings. There is no guarantee that this support will persist in the face of obvious evidence that the Court is, first and foremost, a political institution driven primarily by partisan rulings.   Some veneer of “principled” reasoning is crucial to its continued public support.   Chief Justice Roberts, who is likely to become the new swing vote on the court in closely decided decisions, seems to recognize this and there is some evidence suggesting it has driven his vote when the Court is closely divided.  Is it enough to save the Court’s reputation as an impartial arbiter of constitutional issues?  We shall see.

So far, we remain committed to the belief that we are a government of laws, and not of men and women.  May it always be so.