Trees are very intentional in their choices, by necessity. It’s a cruel world in the forest, and nature does not give a lot of second chances. Over millions of years trees and other woody plants have evolved very specific ways to grow, reproduce, and die, and much of this is predicated by growing together in communities in the forest

When a tree is growing by itself in a lawn and not in a forest setting, sometimes these mechanisms break down and don’t work. An example of this is the failure of one of my favorite trees on campus, a well known and well loved European Beech on the southwest corner of Battell Beach.

Many in our community will recognize this tree, I’ve seen people enjoying it for years. It’s a popular tree with slackliners, as well as hammock denizens. A low, broad spreading canopy gave a dense shade dappled with just enough sunlight to make it not quite feel cave-like. This beech, like some of the elms on campus, had a cathedral-like structure that made the tree feel like it’s own room, but this one was close enough to some major sidewalks that there was never a feeling of isolation.

One of the ways trees have evolved to live in a forest is to shed branches safely. Picture a forest community, with all it’s upper branches reaching for the light, growing every year skyward. Lower branches become shaded and unproductive, and these must be dropped rather than wasting upwards energy trying to sustain them. Trees have very specific branch attachments, so when a branch dies the tree can compartmentalize where the branch was, not allowing ddecay and fungus to spread into the main trunk.

In order for this to happen, the branch needs to be smaller than the piece it is attached upon. Sometimes, particularly in urban trees, the branches or trunks will be similar size, and this will cause a weak union, often made worse with included bark between the union.

The base of the Battell Beach Beech (couldn’t help myself there) was three trunks of similar size all attachted at the root flare, with an oddball trunk or two thrown in. All three had cankers at the base, and all had included bark in the union. Friday afternoon, on a calm day with zero wind or rain, one of these trunks had had enough, falling away, dropping nearly a third of the crown.

It’s possible this could have been prevented, at least in the short term. Other trees on campus have similarly weak attachments, and we’ve preserved these trees by careful pruning, or sometimes cables and brace rods. However, these beech not only had bad trunks, but large cankers (dead areas) were on all of the trunks, further compromising it’s health. Any interventions we could have done probably would have been for naught, or worst case made the tree worse.

With one of the trunks gone and the other trunk union between the two stems also weak, this tree is now much more structurally unstable than before the trunk fell away. We’ll be removing the rest of the tree before the start of the fall semester. While we sometimes don’t replant where trees have been removed, this is such a great location for a tree that’ll it’ll be high on the priority list. “What a rich book might be made about buds and, perhaps, sprouts!”

Landscaping is pretty non-controversial, for the most part. After all, we’re out there, in all weather, making things better. Healthier trees, mown grass, clean and safe walkways, to name just a couple of things we do. In fact, I dare say, we’re only unpopular one time of the year, and we’re right in the middle of it now. Leaf Blower season. END_OF_DOCUMENT_TOKEN_TO_BE_REPLACED
The Black Willow that fell over by Battell has been written about in Middlebury Magazine. It’s a great article for a lost friend. For pictures of the tree, as well as the first time I wrote about it, check out Art Around Campus. The article that was quoted was My Brief Career as an Art Critic. Then, to end the saga, the replacement tree is written about in Mobile Trees. Enjoy!
Around the end of the term, our department starts seeing all sorts of outdoor art appear out of nowhere. It generally seems to involve trees, with varying degrees of consternation on our part. (yeah, I worry too much) Truthfully, most of the art is very respectful of the trees, and the environment, and disappears as quickly as it is born.

Once in a while, though, a particular piece jumps out. 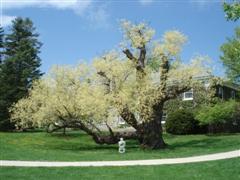 I don’t know the artist, the class, or the professor, but hats off to this piece. Next to one of our favorite trees, a massive Black Willow disintegrating before our very eyes, this piece (don’t even know the name) 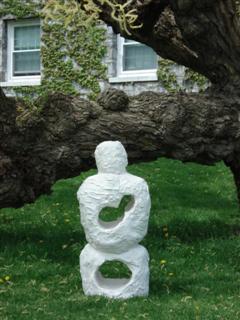 has captured, I think, the spirit of the surrondings perfectly. I’m no critic, and the only art classes I’ve had are in landscape design, but I know what I like. And, to whoever made this piece, well, I’ll quote my grandfather when I’d graduated high school. “You done good”.

Any good gardener knows this is the best time of year for working. It’s cold, only about 50 degrees, the wind is strong, and the ground is wet and very cold, but who cares? 50 feels a lot warmer in the spring than it does in the fall. And besides, this is the finest weeding of the year. END_OF_DOCUMENT_TOKEN_TO_BE_REPLACED