A new category in the Middland blog, and a guest post to boot. I’m sure most of you have seen the new plaza at McCullough, but have you noticed the rocks out there?

I’ll confess the plant world almost lost me to geology in my UVM undergrad career. I’ve always loved it, and have the well worn Golden Guide to Rocks and Mineralsfrom my grade school days to prove it. Plants won, though, but I still work in rock whenever possible. And there is plenty of it at Middlebury, if you know where to look. In fact, I bet you see rocks all the time, and don’t even really think about them. In the landscape department, we call them BFR’s.

We use them all the time as impediments to parking, keeping cars off the paths at ridgeline, and, in the case of the McCullough plaza, as seating. Big F… Rocks are easy, relatively cheap, and easy to move by hydraulics. Not so easy to move by person, although some team rolled one out into Adirondack Road this fall. I don’t totally know which quarry they come from, but they are all well rounded, meaning they come from a quarry probably off of route 116, pulled out of the sand. The round nature comes from being pushed along from glaciers, and they were deposited in the sand before rolling into the Champlain Sea.

When I was meeting with the Master Plan committee out on the site of the plaza this summer, we were discussing the lack of seating around campus (a perennial problem), and John McLeod suggested large rocks. I immediately thought of some of my favorite BFR’s around campus (yes, I have favorite ones), and scheming of a way to get them there.

Once there, I contacted my friend Peter Ryan, and he graciously walked over and identified them for me. Following is his email back to me, with pictures. Hopefully when you run out there to look at them the snow will have blown off them. I’ve learned it’s quite a bit harder to take a good picture of a rock then it is to take one of a plant-go figure… 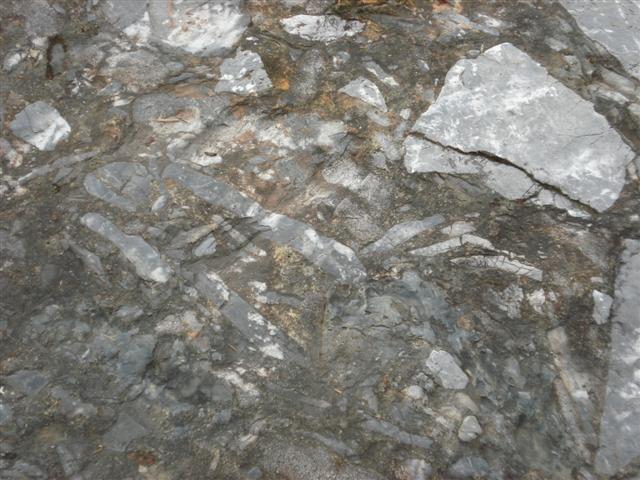 “The one closest to the entrance is a carbonate breccia, full of rock clasts with sizes ranging from a few millimeters to dozens of centimeters (perhaps from 1″ to nearly a foot in diameter), in a matrix of carbonate mud. How did it get that way? Breccias often form when rocks are ripped apart in fault zones, but another common way, especially with carbonate rocks, is cave collapse. Other types of erosion can also form breccias, but my guess is that this one is related to cave collapse. When sea level drops, it leaves carbonate rocks exposed to erosion, and the way that they erode chemically is to form caves… this is what has been happening in Florida for the past 2 million years, since sea level dropped and exposed the Florida peninsula. When caves collapse, the form sinkholes full of rock chunks. Ultimately, the source of the brecciation in this particular rock is hard to say for sure not seeing it in context with wherever the glaciers ripped it from.” 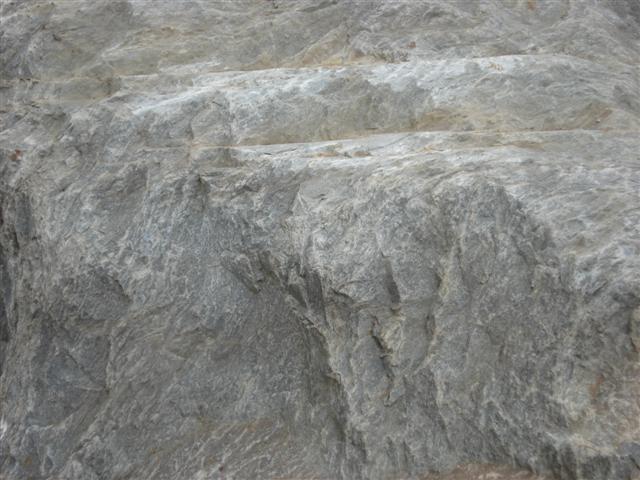 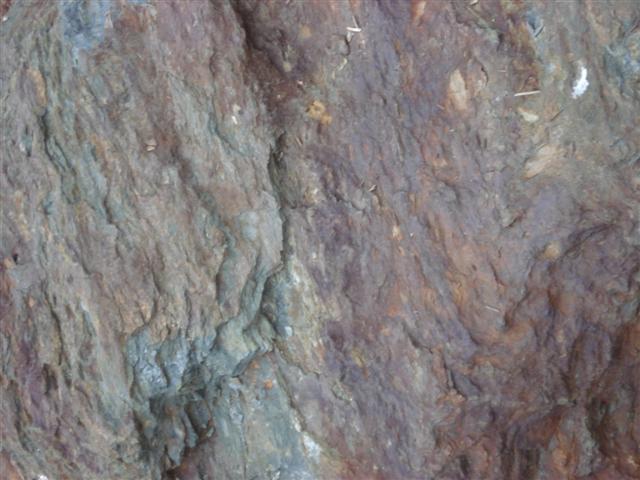 “The third one, the rusty rock, is intriguing. There must be pyrite (iron sulfide) in the rock that is weathering (oxidizing) to iron oxide, producing the characteristic orange-red staining. It is hard to say exactly what the original rock is, maybe a mudstone…”

Thanks to Peter for filling in on everything I’ve forgotten from Intro to Geology-maybe I’ll sneak back in a geology class here some year. I wonder if one of his colleagues wants to positively identify the mudstone, and (hopefully) give him a hard time. Although, I’ll be the first to admit I run into plants I don’t recognize all the time, and rocks are admittedly quite a bit harder. (sorry about that pun)

I’ll write about the plants at McCullough in a later post-the microclimate in the area let us use some fun plants.

One thought on “McCullough Plaza Rocks”