There are two issues when writing about Ginkgoes. One is giving an accurate sense of smell, the other of time.

The easiest one is smell. And the culprit would be the seeds. 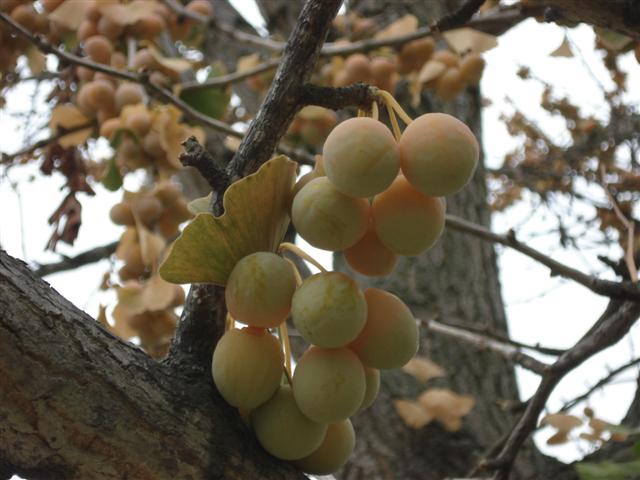 The tree is dioecious, meaning they have separate sexes, male and female trees. All horticultural literature describing Gingkoes state to plant only male, or fruitless trees. Why? The females bear the fruit, and, only clocking in at about 1 to 1 ½” long, the size belies the potency.  The fruit are covered by a fleshy apricot colored outer layer, called a sarcotesta. While it may look edible, the nose will give it away. The flesh contains butyric acid, which some describe nicely as “rancid butter”, but could more properly be defined as, well, people walking nearby a female tree with ripe fruit dropping to the ground tend to check their shoes to see what they had just stepped in, like some recalcitrant dog had just been on the same sidewalk.

Ironically, the seed or seeds hidden by the flesh are edible. The nut-like seeds are a traditional Chinese food, especially at special occasions, such as the New Year or at weddings. Some also claim aphrodisiac qualities-clearly not involving the fleshy outer coating. Quite attractive hanging on the tree, the fruit is best enjoyed from afar. One of the landscapers here at Middlebury accidentally got some of the fleshy part of the fruit on his jeans-he threatened to go home for the day.

Ginkgo is called a living fossil, and with that comes the challenge of explaining time. Relatives of Ginkgo date to Permian time, about 270 million years ago. The actual genus Ginkgo appears in the fossil record in the early Jurassic period, 190 million years ago. Stegosauruses were walking around underneath the trees (they weren’t grossed out by the smell) Time wise, the early Jurassic was when the single supercontinent Pangaea broke up into two-the northern Laurasia and the southern Gondwana. The Gulf of Mexico was just formed, and we’re still a long ways away from anything we’d recognize today as a modern continent. The only real way to relate the age of this is a bit of a stretch-the stone making up Wright Theater is 450 million years old. 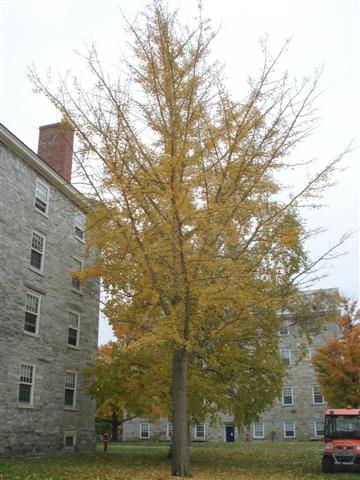 Have Gingkoes survived for 190 million years? Some of their ecological characteristics would make it seem possible, while others not. It’s slow growth, huge seeds, and shyness about reproduction (doesn’t start until relatively old, at about 20-30 years) would suggest that the cards are stacked against it in the cruel world of evolution. Ginkgo does, however, favor disturbed stream side environments, and has adapted to this niche, by bolting, or growing for many feet straight up before branching, and by clonal reproduction, growing new trunks from buds on the trunk, coppicing itself. This allowed it to out-compete the other stream-side dwellers, such as the ferns and cycads. This also explains its gradual loss to flowering plants even better adapted to the disturbed environments then our Ginkgo friends.

Even the possibility of its existence “in the wild” is called into question. On Tian Mu Shan (Tian Mu Mountain) in Zhejiang Province, China is a large population of Gingkoes growing in the woods surrounding Kaishan Temple. Some believe the trees are offspring of plants cultivated for the last 1500 years by the temple monks. In Conservation Biology, Vol 6 NO. 2, Peter Del Tredici, Hsieh Ling, and Guang Yang wrote about counting 167 Ginkgos in the 1018 hectacre preserve, and resolved that wildness is an impossible debate to solve. There was no evidence of smaller self-seeded Ginkgoes nearby. However, the conditions weren’t right, as Ginkgo does not seem to reproduce in the closed canopy of a mature forest.  The question should be that if Ginkgo has been around for 190 million years, shouldn’t they be forgiven for slacking off for the last 1500 years?

Many of the trees of Tian Mu Shan were multi-trunked specimens. Gingko is unique for its development of basal chichi, buds that form at the base of the trunk in response to wounding, tipping, or soil erosion. These can form entirely new clones of trees, offshoots of the parent, and explain a large reason the existence of Ginkgo for its long life span.

Closer to home, Ginkgo is a lovely tree, growing about 50-80’ high, although 100’ isn’t surprising. Width can vary tremendously, from 30-40’ to actually wider than tall. 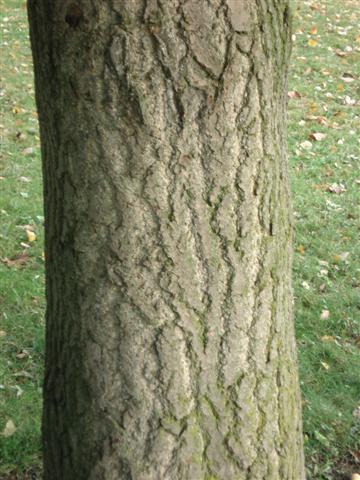 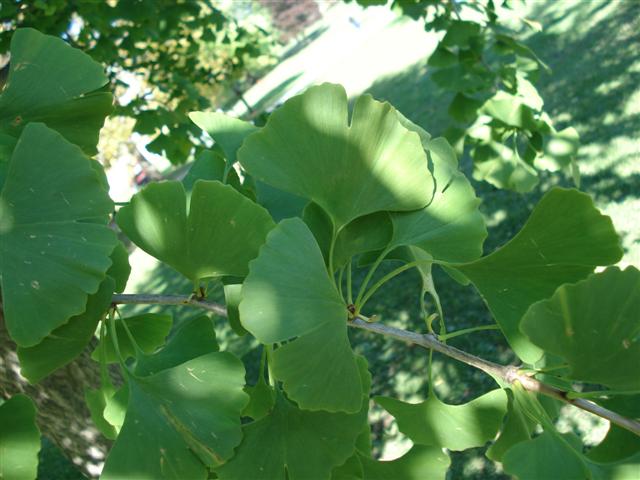 A common name is the Maidenhair Tree, named after the Maidenhair Fern, both having lovely fan-shaped leaves, and both, ironically, bright green. The leaves of the tree are about 2-3” long and wide. 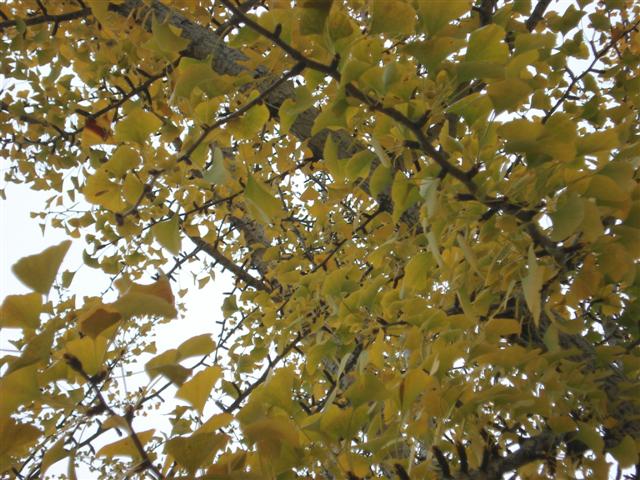 Fall color can often be a spectacular yellow, although the leaves are susceptible to freezing and falling off the tree before coloring, like this year. Another unique trait is the fall habit of dropping all of the leaves at once, seemingly overnight.

Michael Dirr lists over 76 cultivars of Ginkgo in A Manual of Woody Landscape Plants. I own a “Chi Chi”, which reputably will grow into a rounded globe 10’ wide. I planted it too close to a path.

Gingkos are all over campus. My personal favorite is a couple houses north of Public Safety, almost right across from Storrs Avenue. Others are near Warner Science, Painter Hall, and on a sidewalk near Mead Chapel heading toward McCullough.

One thought on “Ginkgo”