Stay Away from BPA!

As the “bisphenol” part of the name suggests, bisphenol A is made up of two phenol groups, which come off the center carbon of a propane, which is made up of three total carbons. BPA is a non-polar molecule, because its -OH groups “balance” each others’ charges out, giving it little net electron-pull (Salehpour et al., 2021).

Following its synthesis, BPA is reacted to produce polycarbonate, a strong, clear, hard resin that has many uses, both in the past and present (Hansen et al., 2021). Uses for polycarbonates include:

BPA-containing epoxies are also used in the lining of metal cans for food and drink preservation. BPA kept metal cans from corroding in extreme temperatures and pressures (Yaln & Akbulut, 2014). Up until April 2019, LaCroix was still producing its cans with BPA-lined walls (Peterson, 2019).

What’s So Bad about BPA?

Estrogen is a sex hormone responsible for regulating the female reproductive system. BPA is classified as an environmental estrogen  – it is a synthetically produced chemical that can bind to and function via estrogen receptors in the body (Yaln & Akbulut, 2014). BPA will mimic estrogen. It is known as an endocrine-disrupting chemical, or EDC. EDCs like BPA can weaken the body’s immune response against pathogens and cancer cells, thus increasing the risk for cancers, especially breast cancer (Lapensee et al., 2009) (Salehpour et al., 2021).

BPA is still being produced today, and a projection from 2016 showed that BPA production will reach 10.6 million metric tons by the year 2022. That’s NEXT YEAR. The continuing production of BPA is fueled by a growing demand for these polycarbonate products from developing countries (Leung et al., 2020).

In the studies I looked at, BPA has been found in the urine of 90-95% of the general United States population. These concentrations could be extremely small, but any concentration can cause concern (Hansen et al., 2021) (Bucher, 2009).

Humans aren’t the only ones impacted by BPA. But BPA does not occur naturally – so how does it get into the environment? One way is airborne – through epoxy resin spray, used in machine plants (Hanaoka, 2002).

BPA contamination also occurs through landfill-based pollution, with wastewater runoff playing a major role. Many landfills rest on or near waterways, and plastic is added to them every single day (Jafari et al., 2021).

Once it gets into the environment, BPA has a slow degradation – taking more than 90 years to biodegrade (and that’s not even thinking about what it degrades into!) (Jafari et al., 2021). With BPA being one of the most prevalent chemicals produced worldwide, the concentrations are bound to persist in aquatic organisms. Fish studies have suggested that aquatic animals face reproductive and developmental difficulties due to BPA (Faheem et al., 2017).

Canada prohibited the use of BPA in food packaging for infants and newborns in 2008 (“Canada Bans Bisphenol A in Baby Products”, 2008). The European Union stopped using BPA in baby bottle production in 2011, and daily limits were cut from 50 to 5 μg/kg body weight/day due to uncertainty about BPA’s toxicity (“Bisphenol A Ban”, 2010) (“Bisphenol A Limits”, 2014).

In August 2008, the Food & Drug Administration (FDA) ruled BPA safe, not altering its label to “some concern” in 2010 (“Bisphenol A”, 2010). The FDA has adapted the lowest observed effect level for BPA as 50 μg/kg body weight/day. Now, it’s banned for anything really dealing with infants or children (baby bottles, packaging for liquid formula, etc) (Leung et al., 2020) (Jafari et al., 2021).

With these regulations on BPA, something needs to replace it. However, a study looking at common replacements showed that replacements had similar impacts (Mesnage et al., 2017). So yes, BPA replacements are also bad.

BPA is a reproductive and immunity-lowering chemical used in plastics. Look for BPA-free to ensure you’re staying away from this endocrine-disrupting chemical. To really keep your body safe, stay away from any plastics, as some BPA replacements may be just as bad.

These days, many people are going vegan. Veganism is a lifestyle choice in which vegans seek “to promote health and peace while reducing the suffering of both people and animals,” (Dupler, 2018) by not consuming any animal products through food, clothing, cosmetics, and virtually every other aspect of consumption.

Veganism is a movement demonstrating the interconnections of living beings, aimed at demonstrating just how outdated the food system is in terms of animal welfare and environmental impact.

Online Shopping- How does it compare to Brick-and-Mortar?

The short answer: no.

How Different is the CO2 Impact?

So…Where Do I Shop in Middlebury?

Plus! Shopping local supports Middlebury and Addison County while ensuring that you can know where your products come from!

What You Can Do

Low-Waste Middlebury and What You Can Do

Humans are depleting Earth’s resources faster than it can replenish them. If everyone lived like the average American, we would need about 5 planets to replenish the resources and absorb the waste generated in one year. You can calculate your Ecological Footprint here.

What is Zero Waste?

Zero waste aims to transform our linear economic practices to a cyclic system, where nothing is wasted and every resource is reused, repurposed, and recycled.

How You Can Help

One billion toothbrushes are thrown away in the US every year. Switching to degradable toothbrushes or saving toothbrushes for cleaning can make a big impact. Find out more in this toothbrush infographic.

The next time you’re in the dining hall, think about reducing your plastic use and food waste. And the next time you use go/papercut, remember the trees being impacted and don’t forget to recycle.

This week’s activity is air plants! We are so excited to have you participate in an air plant making activity with us!

What are some benefits to air plants? We are so glad you asked!

With midterms behind you and finals ahead of you, we are all slightly on edge. Surrounding yourself with some greenery in your room can really help combat this stress! Psychological research on attention restoration has shown that plants help you focus, which might be exactly what you need! Plus, they make you feel happier, calmer, and more optimistic. This study shows how hospital patients with green spaces and plants were found to recover faster.

Although we live in Vermont far, far away from the city, one could always have better air quality and lucky for you, air plants help do the job. This study shows how air plants help absorb mercury in the air. No wonder people keep snake plants, spider plants and pothos!

Air plants don’t need much or any soil to grow, which means that you are mess free! They are epiphytes, which means that they can grow without soil, so long as you provide it with the support structure it needs! Cue wires!

Although the aesthetic purposes may not be what you are looking for, you cannot deny how cute they look! (See pictures below). They give you, the designer, a chance to get creative and play around with them!

With our dorms being ever so large, we need to save space and look for creative alternatives. Air plants are a great choice! They are soil-free and container free!

All the benefits here are from, and we cite, the Balcon Garden Web, and you can read their article here. 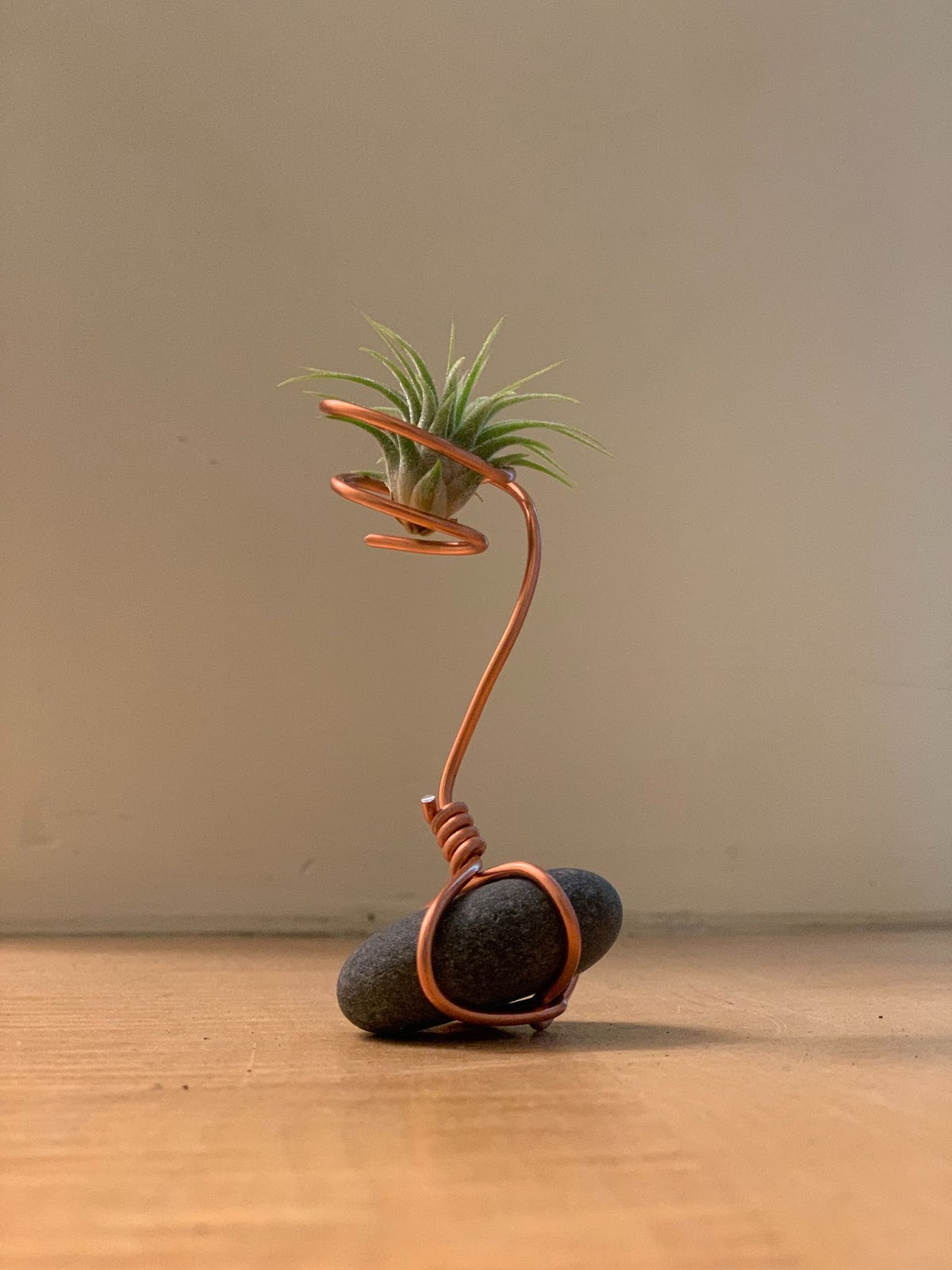 The Benefits of Eco-Art

Check out some of Middlebury’s environmentally-conscious art on your next walk!

Deborah Fisher’s Solid State Change is at the Hillcrest Environmental Center. Her work was inspired by the geology and topography of Middlebury but constructed from recycled tires and electrical insulation. Fun fact: it was once mistaken for garbage and sent away and the college had to retrieve it from the trash!

Michael Singer’s Garden of the Seasons acts as a spot for study, reflection and refreshment of the senses next to the Davis Family Library.

Creativity and Recovery: The Mental Health Benefits of Art Therapy

Caring for Your Succulent!

Add most of the succulent soil, leaving a little bit of room at the top. Make sure not to pack too tightly (to leave room for roots to grow).

Place your succulent on top of the soil, nestling its roots into the soil a bit.

Finish filling the pot with the remaining soil. To prevent rotting, the leaves of the succulent (if you have them) should be completely above the soil. You may be able to add a little more soil after the first watering too.

For more tips, check out How to Plant Succulents.

To find out more about watering, this beginner’s guide can be helpful: How to Water Succulents: Complete Beginner’s Guide

Using a sharp pair of scissors, cut a leaf from right above the stem.

Let your cut leaf scab over and dry out.

Once your leaf starts to shrivel, place it on top of some soil and water it anytime the soil dries out.

After a few weeks of watering, your cutting should start to grow roots.

For more information on propagating, take a look at How to Propagate Succulents from Leaves and Cuttings!

We love hearing from you about how you liked the activity. Please send us pictures of your succulents in their new home or any questions you have. Does it have a name?  If your succulent looks a little sad, shrively or dead, don’t worry! It’s super easy to nurse it back to health. Don’t give up, just be patient.