Both our men’s and women’s teams had really successful fall seasons, and we are practicing hard for the spring season. We are each aiming to attend D-III Nationals near Columbus, Ohio this year. For the men’s team, it will be a chance to defend our national title, and for the women’s team it will allow us to build on our 5th place finish.

The College does not give us a budget for Nationals, and so we have fundraisers up now that will help cover the costs of travel, housing, player fees for the tournament, and food. The women’s team is also fundraising for our (newly created) B team! Unfortunately, we have the same budget as in previous years, but are now trying to stretch it to cover both teams and could really use any and all help.

We are soliciting donations now, as opposed to in April like previous years, so that we will have access to the funds in time for Nationals.

Thanks so much for donating, sharing, and supporting <3.

The first practices for all genders will be Tuesday 9/11, Wednesday 9/12, and Thursday 9/13 from 4:30-6:30 on Battell Beach. Some people will be out throwing before practice, so come a little early if you want to meet some returners or get some extra practice. All levels of skill and experience are welcome. Bring roommates, cleats, discs, and a light and dark shirt if you have them. See you there! 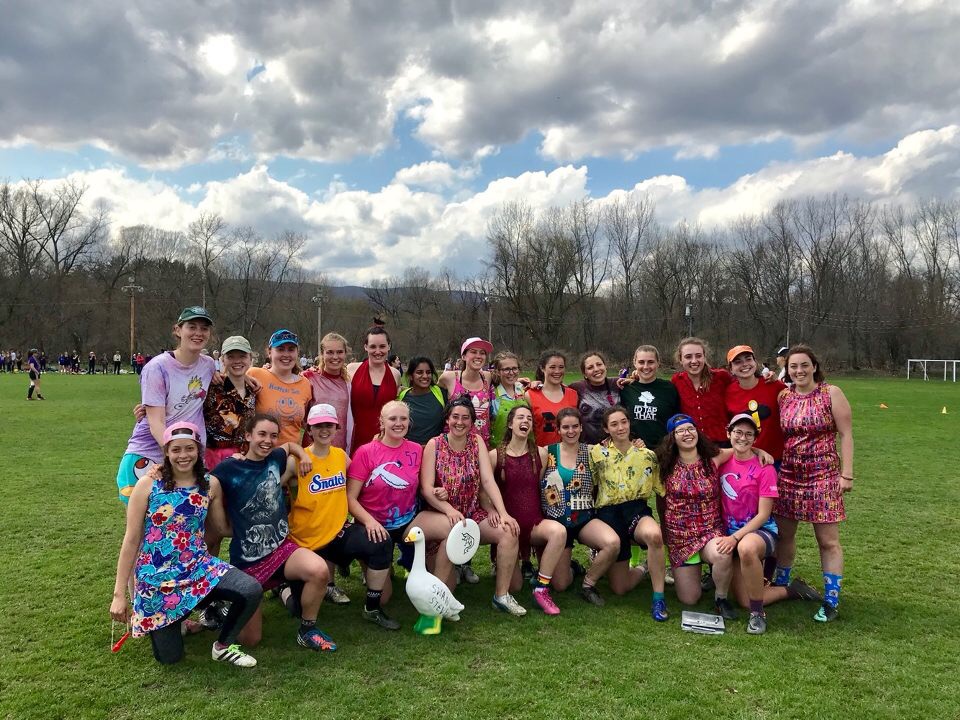 The 2017-2018 season saw the Middlebury Lady Pranksters (MLP) coming up with several narrow losses in what turned out to be a competitive, building season after a switch from DI to DIII this year. The graduation of a cohort of superhuman cutters and handlers in May 2017 left MLP with an exciting challenge to fill some big holes. But we know what they say about digging holes – it builds character, and this year fresh faces found plentiful opportunity to improve, and cut and huck their way through spring break tournaments down south and through sectionals and regionals this spring. Heading into the 2018-2019 season, MLP looks forward to more dancing, more loving, another chance to qualify for DIII Nationals, and expects another competitive season from the women of New England ultimate. 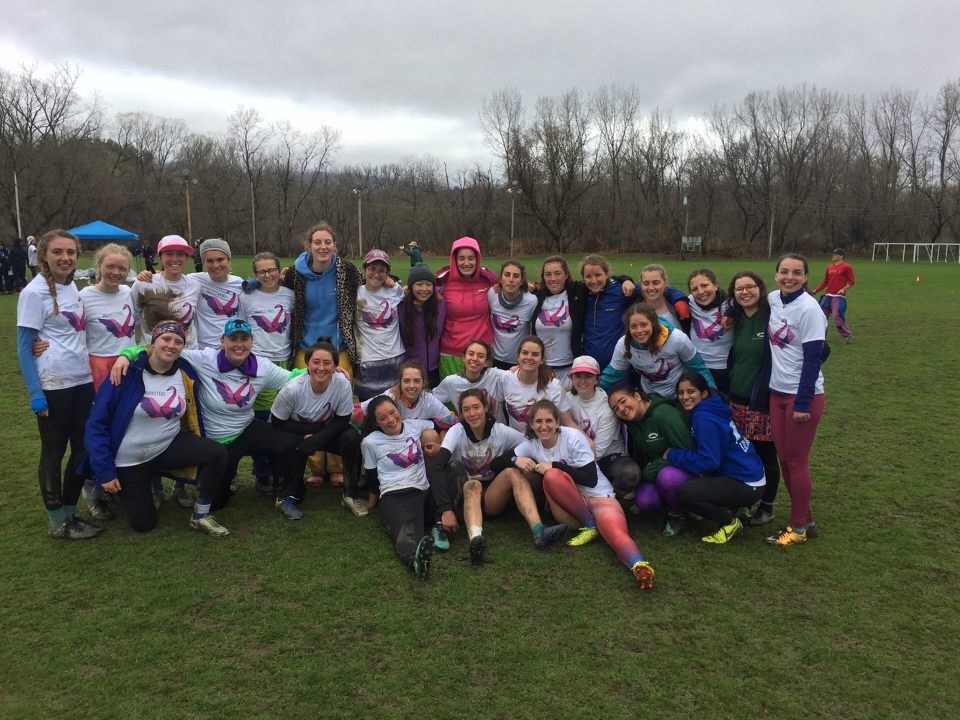 MGP, the Middlebury Guy Pranksters, had an incredible season that culminated in a third-place finish at the Division III National Championships in Rockford, IL.

Our season started in late February at the prestigious Bring the Ruckus 9. We cruised through pool-play, finishing 4-0, without giving up a single break. Unfortunately, bracket play was cancelled due to bad weather, giving the freedom-loving Pranksters an opportunity to hang out at the luxurious Motor Sports Inn & Suites before checking out the Liberty Bell on the way back to the Frozen North. After a fairly long hiatus, MGP returned to action at the Atlantic Coast Open in Virginia Beach. We won our pool, before dropping a tight game to Duke in the pre-quarters. We bounced back on Sunday with wins over the University of Pennsylvania and Luther, tying us for 9th place, and putting us at 5-1 on the weekend.

The swans then flew south for the week, continuing our season at D3 EastUR in Richmond, VA. This was our first real test against other DIII competition, and we took care of business, going 6-0 and winning the tournament, including 15-9 victories over Richmond and Mary Washington. The Patriotic Pranksters won a Hucket Bucket (from 2014) and took this nice picture in front of this nice flag.

That ended the regular season, and saw the Pranksters head into the postseason with a cumulative record of 15-1. At sectionals, we claimed victories over New England rivals Keene State, Maine Farmington, Colby, Bates, and Bowdoin in pool play, while dropping one to Dartmouth. The finals were a rematch against Dartmouth, and this time, MGP came out on top. After being down 8-6 at half, Swan Steve at one point rattled off five breaks in a row to win 13-12 in hard cap, making us back-to-back North New England DIII champions.

Fueled by La Croix and love for one another, the guys drove down to Smithfield, Rhode Island for regionals, ready to claim our spot at Nationals. The tournament opened well for MGP, going 4-0 in pool-play with wins over Bowdoin, Bentley, Williams, and Colby. Due to an upset in the other pool, Sunday morning started off with semifinals against Bryant, in a matchup between the #1 (them) and #3 (us) ranked DIII teams in the country. After we were up late in the second half, Bryant came away with a 13-11 victory, sending MGP to battle in the backdoor bracket. We bounced back with 15-12 wins over Amherst and Williams, and punched our ticket to Rockford in two weeks. That got us feeling some kinda way.

MGP came into DIII Nationals seeded third. Saturday morning began with a long-winded captains meeting, which the MGP captains skipped to warm up and sing. Pool play saw us take victories over North Park, Puget Sound, and John Brown. Bracket play was delayed the next morning due to rain, allowing MGP to teach other teams our choreographed dance to Body by Loud Luxury (a musical masterpiece).

Middlebury’s quarterfinal was a rematch against Mary Washington, and the game ended the same way. MGP rode physical defense and efficient offense to a 15-8 victory and a spot in the semifinals. 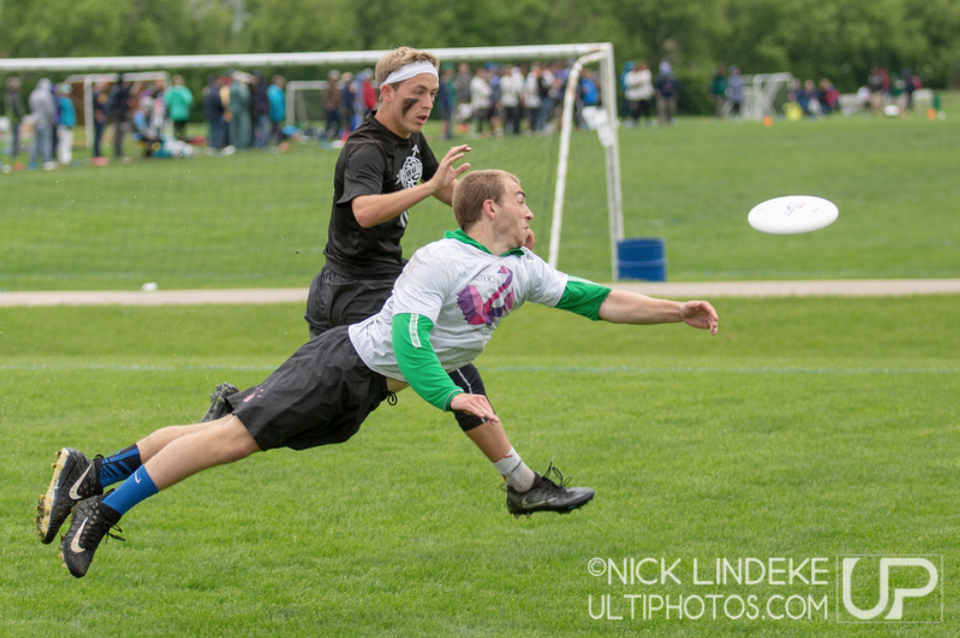 Unfortunately, MGP’s season came to an end in the semifinals against Air Force. The swans were a bit slow in the first half, and despite winning the second half, were unable to make up the deficit. The game was filmed by USAUltimate.

MGP is proud of what it accomplished on and off the field this season. Our cumulative record of 31-4 (our only two losses to DIII teams coming to the #1 and #2 teams in the nation) reflects the work that we put in all season. But our season was also awesome because of what happened away from USAUltimate’s spotlight. We drank a ton of la croix, danced to Body, kept our creek beds moist, and created a big Pink family. Congratulations to our graduating seniors Nathan, Connor L, and Connor H (kind of. Feb). While we’ll miss you, we hope we won’t miss you too much; because we have big goals for next year. The first practices for all genders will be Tuesday 9/12, Wednesday 9/13, and Thursday 9/14 from 4:30-6:30 on Battell Beach. Some people will probably be out throwing before practice, so come a little early if you want some extra practice. All levels of skill and experience are welcome. Bring roommates, cleats, discs, and a light and dark shirt if you have them. See you there!

The first practices for all genders will be Tuesday 9/13, Wednesday 9/14, and Thursday 9/15 at 4:30 on Battell Beach. Some people will probably be out throwing before practice, so come a little early if you want some extra practice. All levels of skill and experience (or lack thereof) are welcome. Bring roommates, cleats, discs, and a light and dark shirt if you have them. See you there!

We will have our first practices (all genders) on Tuesday 9/15, Wednesday 9/16, and Thursday 9/17 at 430 on Battell Beach. Everyone is welcome regardless of past playing experience or skill level. Bring cleats and discs if you have them. See you there! That’s right, DIVISION I. We upset 11th-seeded University of Washington and finished the tournament in 17th place. Give to Midd Ultimate

All other times (while we're not running this fundraiser):

Please use the official Give to Middlebury page for all ultimate related donations. On the form just choose "Other" and type in "Ultimate Frisbee Club".

If done this way the money will go straight to our teams to pay for things the college won't pay for (like housing and nationals). Feel free to share this information as well. We as an organization can't solicit donations but you certainly can so share away!!!

Shoot us an email if you are so inclined