It’s been almost two weeks since Mitt Romney announced his selection of Paul Ryan as his vice presidential running mate, which provides enough time to take a first look at Ryan’s impact on the race so far.   In this vein, I think it is instructive to recall the pundits’ immediate assessment of the Ryan pick.  Needless to say, the reaction evinced a distinct partisan slant.  Romney supporters hailed the pick as Obama’s “worst nightmare”, a bold choice that offered voters a clear contrast  between the President’s unsustainable big spending, deficit-enhancing  policies versus a Romney-Ryan led return to fiscal prudence and economic growth. Moreover, by refocusing the campaign on how best to fix the economy, the Ryan pick shifted  the media narrative away from Bain Capital and Romney’s tax returns and, not incidentally, put Wisconsin back in play. Obama’s backers, on the other hand,  described the Ryan pick as a stunningly bad choice , one that not only exposed Romney’s weak electoral hand but also refocused the campaign from a referendum on  Obama’s middling economic record to a debate over Ryan’s radical House-backed budget legislation, including politically controversial proposals to reform Medicare.

Anyone reading this punditry might wonder if they were describing the same man!  Clearly, however, partisan pundits on both sides indicated that the Ryan pick – if not a “game changer” – was surely consequential in terms of the race.  The divide was over whether it would help or hurt Romney.

There was a third possibility, of course, one that I proposed in a post written shortly after Romney’s pick was announced:  that it wouldn’t have much impact on the race at all.  As I wrote then: “There is always a tendency for the media, particularly in the news-starved period that is August, to overreact to these types of political events.   Pundits have been quick to analyze what the Ryan pick tells us about Romney’s campaign strategy, and to assert that this high risk-high reward type of pick is destined to shake up the race. But we should not let the sheer volume of media analyses blind us to a third potential outcome: that the pick will be largely inconsequential.   Romney, after all, still heads the Republican ticket and the economic fundamentals will still likely drive the decision for most voters.”

I based my prediction on the historical record.  To begin, polls suggest that for most people in previous election the VP pick did not influence their vote choice for the top of the ticket. Moreover, Harry Enten shows the median impact of the VP pick on a candidate’s polling status prior to the convention is about 4%. 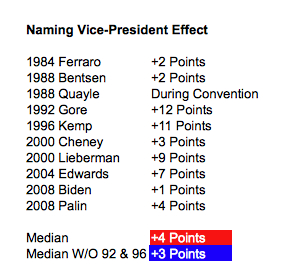 Those figures, moreover, tell us nothing about how long that 4% bump lasts.  As you can see from Enten’s chart, three of the four biggest bumps came during losing efforts.  Even that celebrated “game changer” Sarah Palin likely had a minimal impact on the outcome of the 2008 race. Although exit polls indicate that McCain won, 56%-43% among the 60% of respondents that said the Palin pick was “a factor” in their vote, it was not enough to swing the election his way.

All this suggested to me that despite the projections of the partisan punditry, the Ryan pick would have little lasting impact on this campaign.  So far – with one potential caveat – I seem to be right.  Stanford political scientist Simon Jackman’s analysis of polling data suggests the race remains virtually unchanged, with Obama leading Romney by about 46%-45%, as indicated in this graph. This is not to say the Ryan pick was without consequences, however.  To begin, it appears to have mobilized the Republican base which has responded by opening its collective pocketbooks and contributing to the Romney campaign. Perhaps of greater significance, it may have tightened the race in Ryan’s home state of Wisconsin.   As this Pollster.com chart shows, Romney has gained an average of about 3% in four Wisconsin polls of likely voters since the Ryan pick was announced, which narrows Obama’s lead there from about 5-6% to closer to 2-3%. We can’t be sure,  of course, whether this polling bounce will last, but for now it makes Wisconsin almost a tossup.  If Romney were to win Wisconsin, and its 10 Electoral College votes, it provides him with a bit more flexibility in how to put together enough states to reach the 270 Electoral College vote threshold. Keep in mind, however, that states tend to move together; if Romney picks up the additional 2-3% needed to put him over the top in Wisconsin, he’s likely to do so in other battleground states as well.   So we shouldn’t fixate on Wisconsin as the key to Romney’s electoral fortunes.

At this point, then, I stand by my initial assessment: the Ryan pick will likely have at best a marginal impact on the 2012 presidential election.

Between conference papers, grading, reading journal submissions and prepping for lecture, I couldn’t live blog tonight even if I wanted to, but I did want to post a brief update on the state of the nomination race after today’s primaries in Wisconsin, Maryland, and the District of Columbia.  The short story is that this is a good night for Mitt Romney who, the networks are projecting, is likely to win all three contests.   More importantly, he’s likely to win 80 or more delegates tonight, leaving Rick Santorum to take maybe a dozen delegates, give or take a few.   None of this is surprising, given the demographics of the three states.  In Wisconsin, evangelicals constituted about 37% of voters, according to exit polls – far below the 50% threshold that has to date signified a certain Santorum victory. In Maryland they constituted 38% of the vote. At this point in the race, much as we saw in the latter stages of the Democratic primary fight in 2008, demographics are destiny, and the demographics of these three states favored Romney.

Meanwhile, media pundits are clearly hoping to create the impression that the Republican race is over by talking about the momentum Romney will pick up because of his victories tonight.  The reality is that Romney’s victories tonight may affect the media coverage, but they likely will have almost no impact on the next set of primaries which take place on April 24, and which will include Santorum’s home state of Pennsylvania.  (Amy Walter is now tweeting that the Wisconsin results finally put an end to the Republican primary because he did better among some demographic groups than he did among those groups in Ohio.  This is nonsense, of course.)    Note that in both Wisconsin and Maryland, Romney’s support, once again, increases as we go up the income ladder. However, he did increase his support among lower income voters, relative to Santorum, at least in Wisconsin, compared to how he did in previous Midwestern contests.   But given the margin of error in exit polls, it’s not clear this really signifies an expansion of his support.  Note that as in previous contests, his support also increases among older voters.

Interestingly, among those voters who made up their mind today in Wisconsin (13% of voters), Santorum was the clear victor, 46%-27%; among the 35% who made up their mind in “the last few days”, Santorum won 42%-39%.  I’m not quite sure what to make of this.    In other shocking news – at least shocking to those watching the CNN coverage – Santorum once again does as well among women as he does among men in both Maryland and Wisconsin.  Hard to believe, I know, given his statements about abortion, contraception, etc.  He also outperforms his polling support in both Wisconsin and Maryland – not that this matters all that much in terms of delegates.  But it does indicate that Romney hasn’t changed the dynamics of this race.

Bottom line tonight?  The media will come out strong tomorrow about how tonight’s results indicate that Romney has  regained momentum and is poised to close this nomination fight out.  The reality is that tonight’s results change nothing; Romney went into tonight as the frontrunner, and he will come out as the frontrunner, but there’s no evidence that he’s gaining “momentum” or expanding his coalition.

Again, I apologize for the decrease in blogging frequency, but my day job is calling with increased frequency in recent days.