First the bad news for Clinton supporters.  The national polls have indisputably tightened since Clinton’s peak post-convention bounce in early August.  On August 8, the HuffPost aggregate polling had her up by 8.4%, 48.3%-39.9% over Trump, consistent with pundits’ predictions that this would be a blowout election.  As of today, however, her aggregate lead is down to 5.4%, a loss of about 3% in the aggregate polls during the last month. The RealClearPolitics poll of polls shows a similar trend, with Clinton’s lead dropping from 7.2% to 3.9% in the same time period.

Now for the good news.  This race was always going to tighten, as I have been telling audiences for my election talks for the past month.  Those who point to 1964 or 1972 as electoral precedents in which an ideologically extreme candidate got crushed are misreading history.  As Andrew Gelman points out, the results in those two elections were likely driven more by the economic fundamentals than they were by Goldwater or McGovern’s ideological extremism.  Gelman’s point is consistent with recent research that suggests ideological extremism in candidates contributes only marginally at best to presidential election outcomes. To this I would add two points.  First, it’s not clear to me that voters consider Trump an ideologically “extreme” candidate. For what it is worth, I’ve been surveying Republican delegates who attended the national convention, and they routinely place Trump to the ideological left of where they place the average Republican voter – that is, closer to the center of the ideological spectrum. Granted, their views are likely colored by their own more conservative attitudes, but nonetheless this is not consistent with the argument that Trump is an ideological extremist.  The second point is that in both 1964 and 1972, the race included an incumbent seeking a second term in office during a time of relative economic prosperity, which likely worked in the incumbents’ electoral favor.  Obviously, no incumbent is on the presidential ballot in the 2016 race.

Consistent with this argument, the political science forecast models that are just coming out almost uniformly indicate that this will be a close popular vote, with most forecasting a final two-party popular vote margin of 4% or less. A plurality of the models that I have seen give Clinton a slight edge in the popular vote, but some of those with excellent track records, such as Alan Abramowitz’ Time For a Change model, are forecasting a Trump victory.

Wait, you ask: why is a forecast that this will be a tight race good news for Clinton?  To begin, as I noted in my last post, Trump is – so far – still slightly underperforming the models.  Yes, he’s closed the gap – but not yet to where the forecast models suggest the generic Republican candidate should be. Consider as well that Clinton has largely ceded media coverage to Trump for the last few weeks as she has focused on raising cash through at a series of big-ticket fundraising extravaganzas and, evidently, spending time preparing for the debates as well.  Moreover, her absence has coincided with a flurry of bad media coverage driven by the release of the FBI interview notes regarding her emails, as well as allegations that she was engaged in a pay-to-play contribution scheme involving donors to the Clinton Foundation.  Although her surrogates have been out on her behalf trying to beat down these stories, they haven’t gotten nearly the coverage that Trump has attracted – coverage that he has utilized to highlight Clinton’s email and Foundation stories.  As a result, her favorable/unfavorable gap – already in negative territory – has grown by about 5% since early August, and is now only about 5% better than Trump’s.

Moreover, polling remains volatile; we’ve seen the polling gap close in similar fashion at least twice before since both nominees clinched.  Since May, Trump has closed to within 4% of Clinton on at least two occasions in the HuffPost aggregate polls, only to see her subsequently widen the gap again.  And this latest polling flurry hasn’t boosted Trump above his post-nomination clinching high-water mark of about 42% support.  So there’s not a lot of evidence that Trump is expanding his coalition these last few months.  Instead, what the recent spate of negative media seems to have done is make some who recently might have been predisposed to vote for Hillary to reconsider their support for her, but there’s not much evidence they are moving over to back Trump.

It is true that, as Drew Linzer documents, between those who remain undecided or express support for a third party candidate, such as Libertarian Gary Johnson or the Green Party’s Jill Stein, we are seeing a historically high number of potential voters who aren’t committing to either major party candidate at this point. 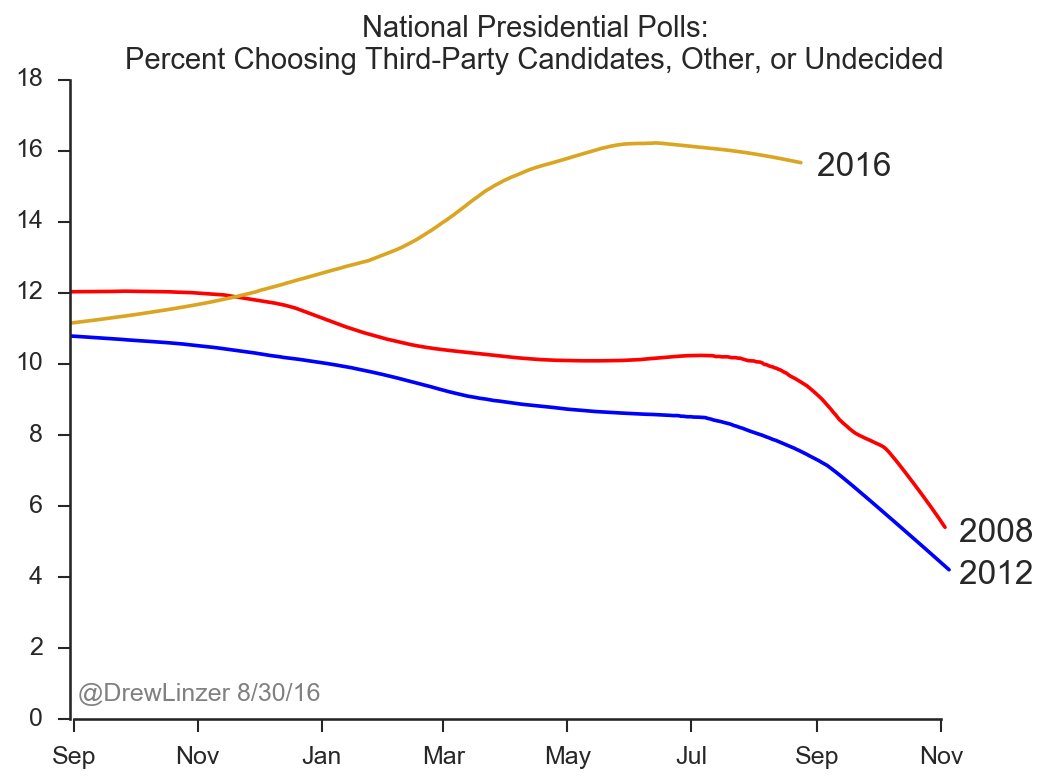 And there’s some evidence that this group contains slightly more potential Trump voters (although as I noted in my last post other survey evidence suggests Clinton may have a slight advantage among undecideds).

But in the aggregate, the difference in the number of undecideds leaning Republican versus those leaning Democratic isn’t going to be enough to put Trump over the top – he has  win a substantial number of the “pure” independents as well.

So where does that leave us? If I were a Clinton supporter, I would be more worried if Trump’s gains in the polls were occurring while Clinton was in full-blown campaign mode, out making her case to the voters.  Right now that’s not the case.  However, let’s see where things stand in mid-September – which is historically about two weeks after the final convention has ended.  If Trump has closed to, say, 2%, then Clinton supporters can panic. As of today, however, they should ignore the polls and instead head to nearest swimming hole to enjoy this gorgeous summer weather.  That’s where I’m going.