Ted Cruz, fresh off of his Iowa victory, has been campaigning heavily in New Hampshire the past week, trying to make it two-for-two as voting gets underway for the Republican presidential nomination. Although he has been slowly climbing in New Hampshire polls since mid-summer, when he was down at about 4%, Cruz has not seemed to get much of polling boost here since his Iowa victory, and in the last several days some polls show both Rubio and Kasich edging ahead of him into second place, with Bush nipping at his heels. As I noted in my last post, there’s reason to suspect that Cruz’ brand of social conservatism might not play well in New Hampshire, which by some measures has the least religious voters in the country. For that reason I was eager to see whether Cruz might modulate his religiosity a bit while on the stump here. To find out, your intrepid blogger finally got to a Cruz event today, at the Tuckaway Tavern in Raymond, NH. Here’s my report:

I hit snow just before arriving at the campaign site, and had to detour around an accident in order to arrive in time. Cruz’ bus, with the “Cruzin’ To Victory” logo on the side, was already in the parking lot when I arrived. 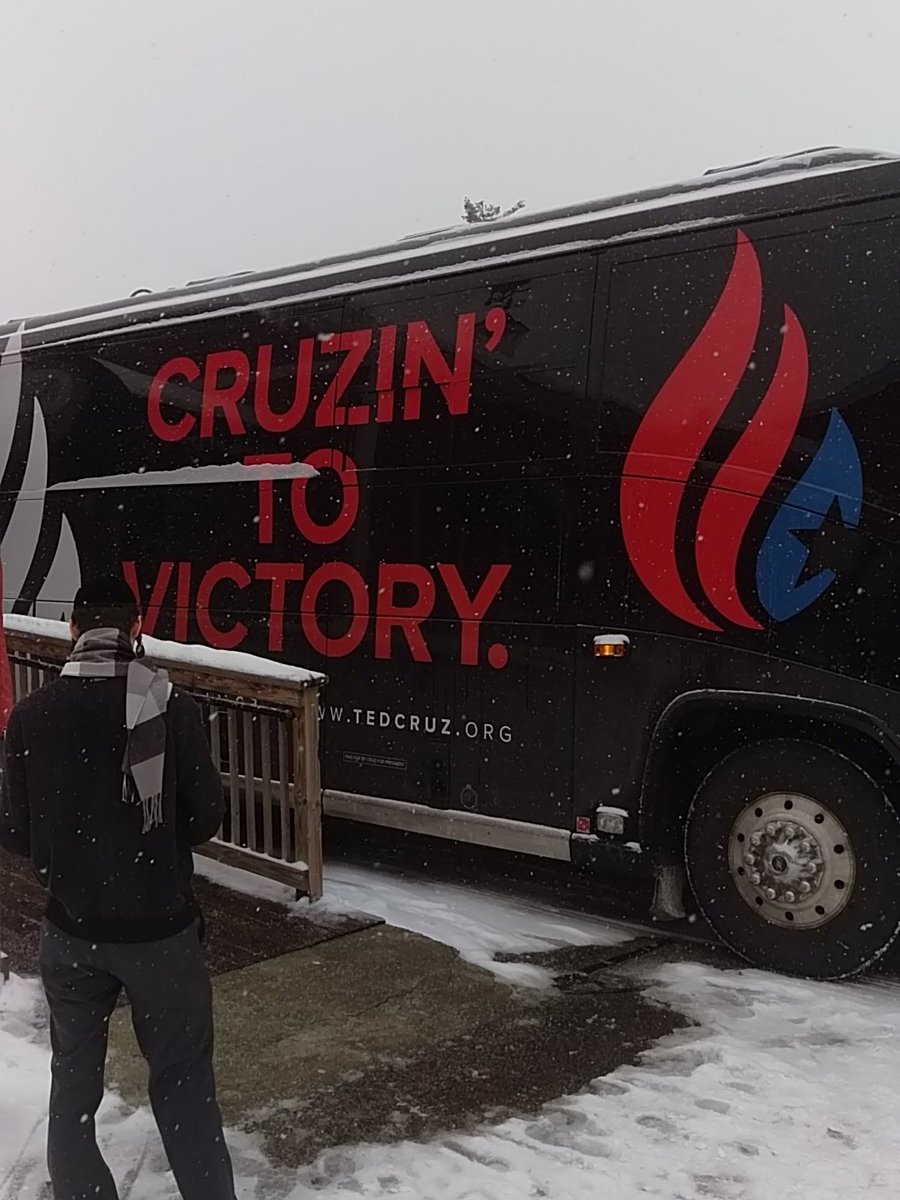 Inside the crowd, which I estimated at about 150 people, snaked from the event room into the bar area. While waiting for Ted we said the Pledge of Allegiance and then listened to the warmup act extolling Ted’s Reaganesque virtues. As it turned out, I wasn’t able to get into the main room and so had to watch events from outside. Fortunately, I was right by the entrance so that when Ted arrived, he walked right by me as I fumbled with my phone trying to take a picture while getting crushed by the media. The result was one in a long line of blurry photos. 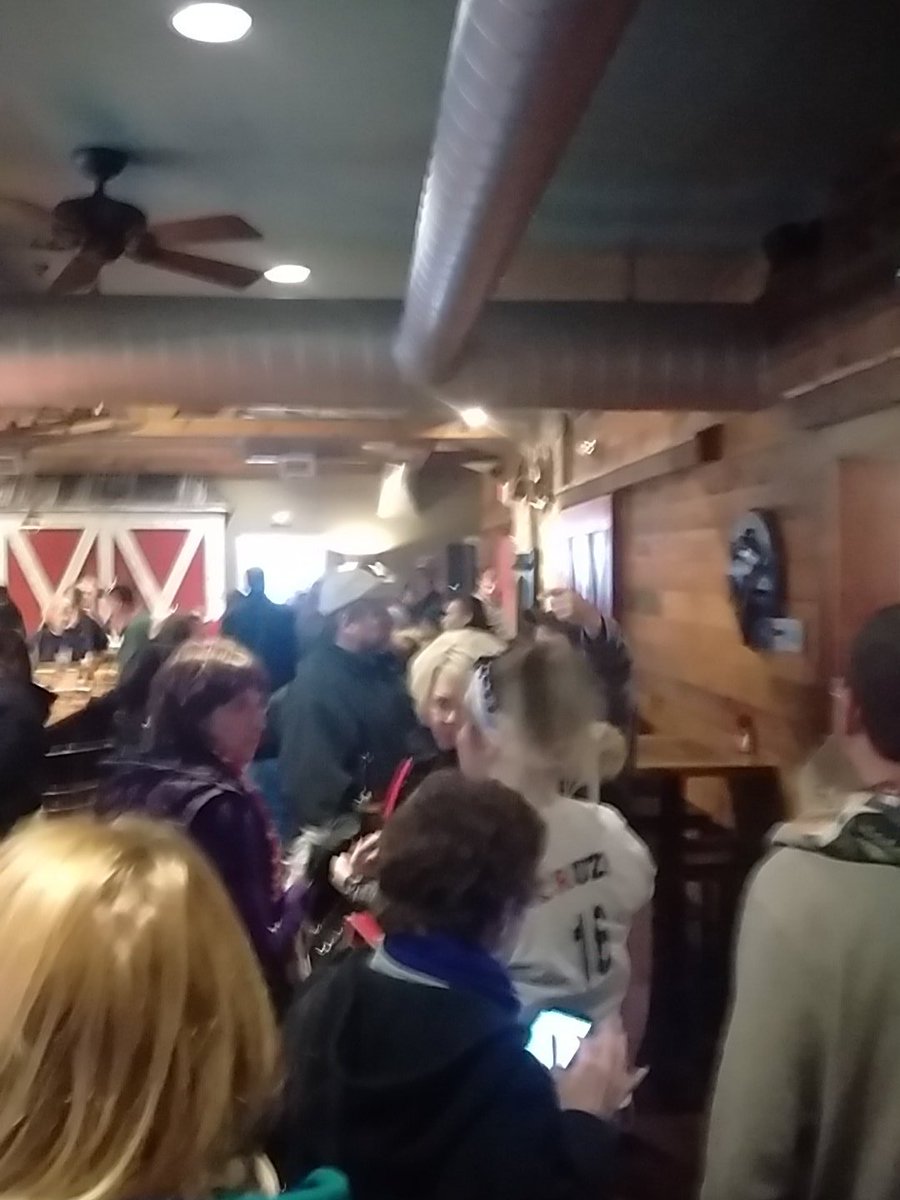 The first thing you notice about Ted is that he is short. The second is that he speaks much like a preacher, making brief points in a clear, commanding voice, and then pausing to let them sink in. It’s a different style than Trump’s “If I think it I say it” filter-free seat-of-the-pants discourse or Rubio’s fully formed declarative paragraphs. Because I was traveling alone and live tweeting the event, I don’t have detailed notes on what he said during this appearance, so I’ll just provide a brief overview here. He began by noting that the professional pundits and media people had continually counted him out, just as they had Ronald Reagan. But Reagan proved his doubters wrong, and Cruz had done the same in Iowa. He now wanted to prove them wrong again in New Hampshire. “We are seeing the Reagan coalition coming back” he proclaimed, after listing the muliple groups that are supporting his candidacy.

He argued that the nation is at a crisis point (something almost every Republican candidate says on the stump), and that the key to turning it around is economic growth. To promote growth he promised to repeal Obamacare and to institute a flat tax plan that was so simple people could fill out their taxes on the back of a postcard. This had the added value of allowing the government to eliminate the IRS. He promised a return to constitutional values, citing the need to protect the 2nd amendment, but also the 10th (“or as Obama calls it, ‘the what?’”). At this point Cruz was interrupted by a protester who appeared to want to excommunicate the demon that was possessing Cruz. After the protester was removed, Cruz joked, “Lefties don’t usually believe in God.” 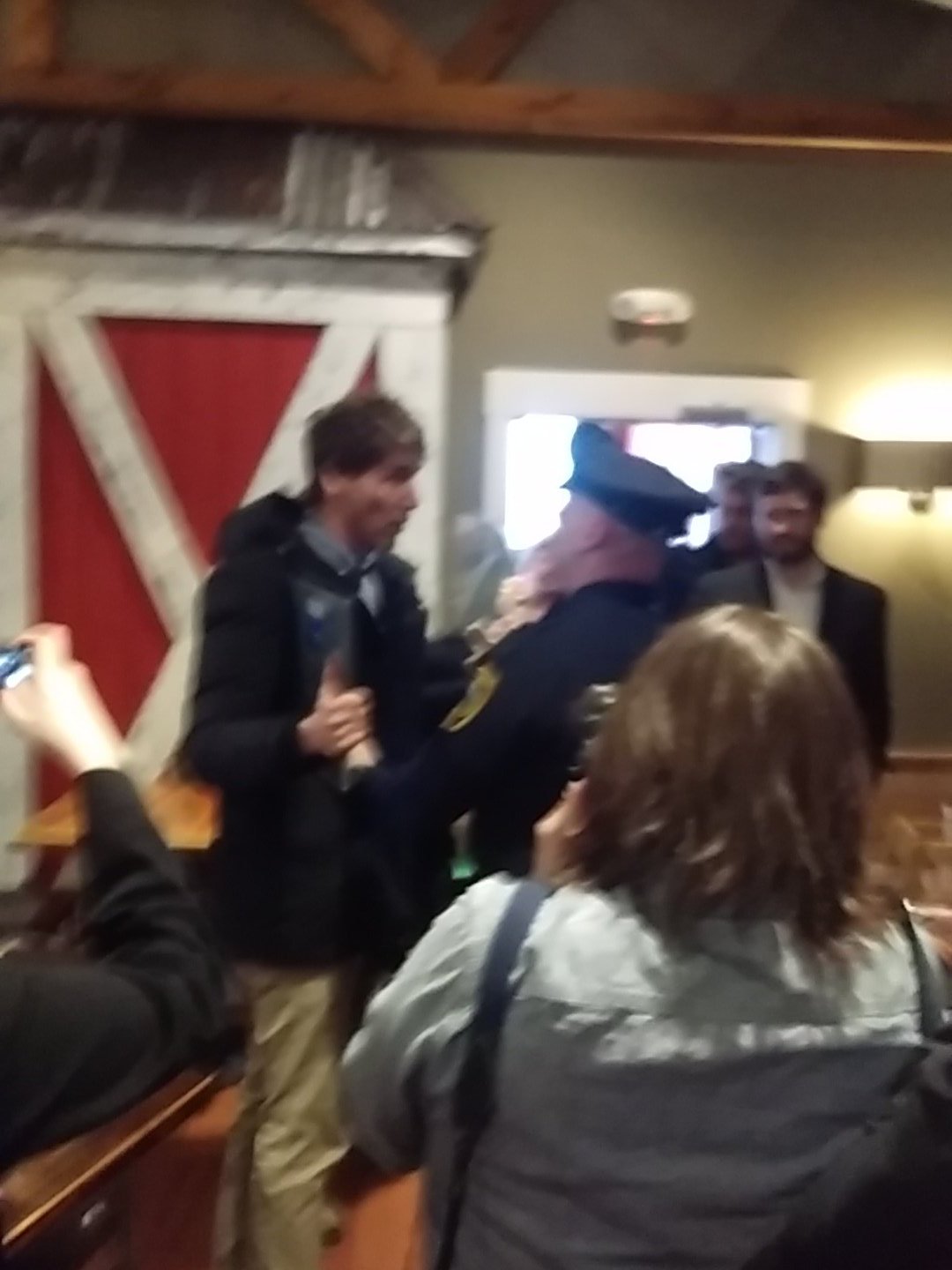 Despite being in New Hampshire, religious themes figured prominently in Cruz’ speech. At one point he referenced Ronald Reagan’s quoting Second Corinthians (or as Trump prefers, “Two Corinthians”) during his inauguration, and then proceeded to quote the passage verbatim in what might have been a veiled swipe at Trump. If so, one had to wonder whether the anecdote played better in Iowa than here in New Hampshire.

When he was done Cruz took four questions (which I couldn’t hear from my vantage point). He noted that there are three keys to righting the “ship of state”. The first is to use executive action to repeal the executive actions taken by Obama, which he would do on “day one.” The second is to take advantage of the President’s greater authority in foreign affairs to correct mistakes made in that realm. So, he would move to repeal the Iran nuclear treaty, and would push to have Israel’s capitol relocated to Jerusalem. (Neither can be done by presidenital fiat, but never mind.) Finally, he cited the need to work with Congress on legislation. The only way to do that, he argued, is pressure legislators by developing a grass-roots mandate for Cruz’s legislative priorities. (Never mind that political science research dating back to Neustadt’s Presidential Power suggests the folly of presidential efforts to “go public” as a way of moving a legislative agenda.)  For Cruz, the key is to make congressional noncompliance an electoral liability for individual legislators.

As he brought the event to a close, Cruz asked audience members to remember to vote “10 times tomorrow.” “No, I’m not a Democrat” advocating voter fraud, he joked. Instead he wanted them to call friends, family, their mother (“You should do this anyway”) – at least nine other people and ask them to vote for Cruz. If everyone did this, he predicted victory tomorrow. He then concluded by asking the audience to pray for the United States.

After the Q&A ended, Cruz stayed for another 20 minutes taking selfies with the 30-40 people who lined up for pictures. During this period I took countless shots of the back of Ted’s head, my view blocked by a security guard. 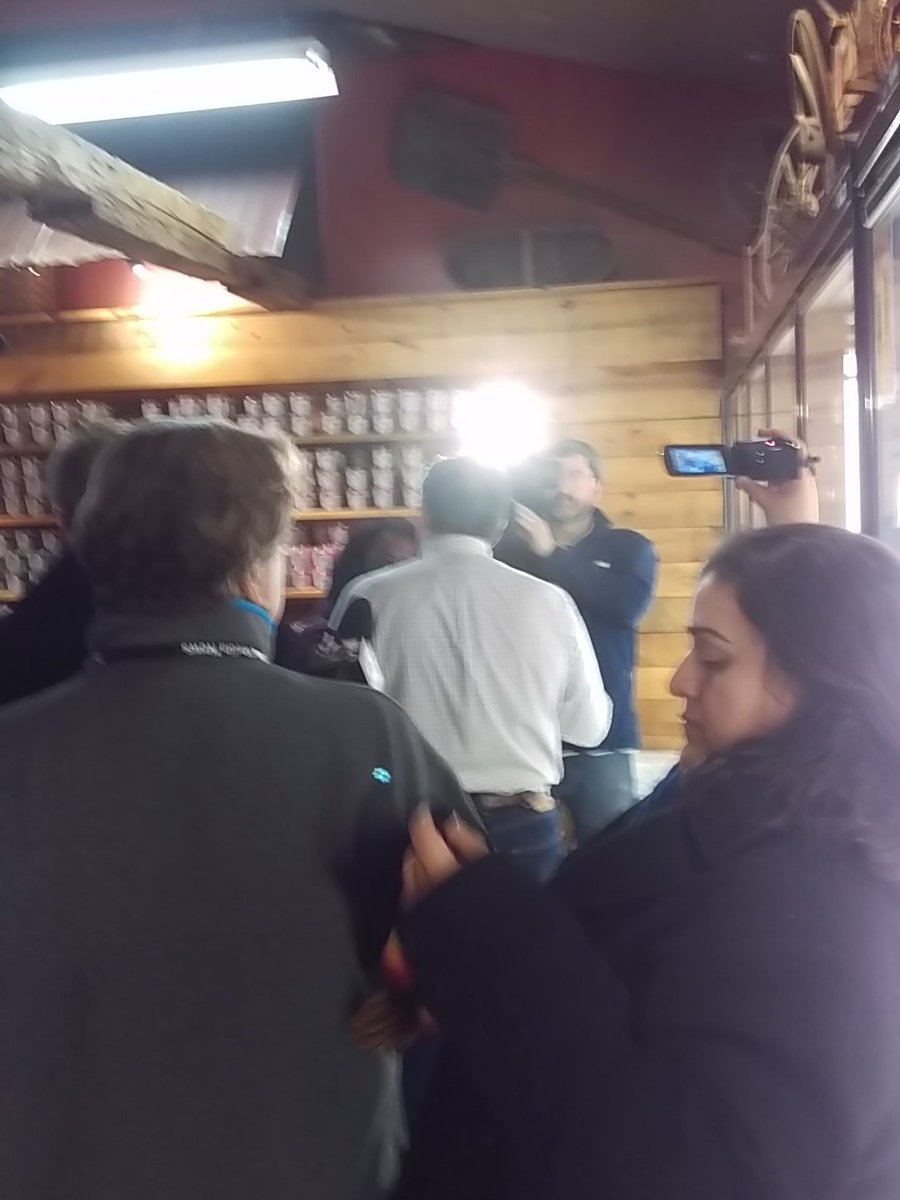 At one point a bearded man wearing a knit cap and carrying a large American flag and a paper back tried to get into the room with Ted, but was stopped by a local cop. “What do you have in the bag,” the cop asked the man. “Ice cream,” he replied. “Do you want some?”  There were also representatives of the conservative media watch dog group there warning me not to trust the “liberal media.”  This was the first time I had seen them at any event.  When I asked the protestor if there was anything specific I shouldn’t trust, he replied, “The liberal media.”  I did manage to get a campaign button from them – the only Cruz swag I gathered, which was a disappointment. 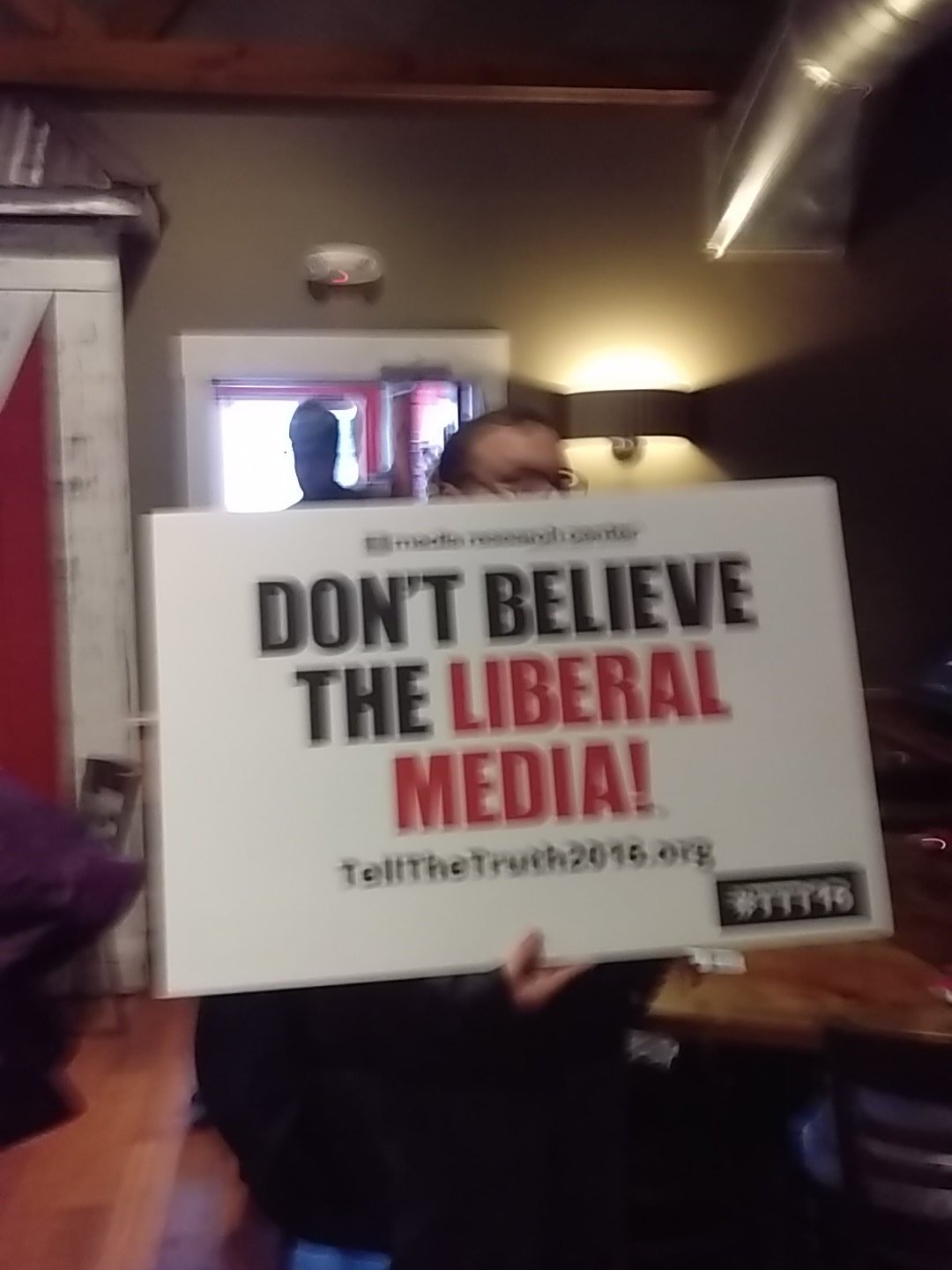 As Cruz scurried by me to leave the premises, I could hear him asking his campaign aide “Where do we go next?” and thought this whole experience must be surreal for him. Unlike Kasich, who seems to be thoroughly enjoying the whole experience, I thought Cruz looked a little bit tentative or defensive as he walked by – as if he feared the worst come tomorrow.  I think he senses that this is not his home territory, but he’s trying to make the best of it.

The crowd skewed older, and seemed to be a mix of strong Cruz supporters and those who were just curious to learn more about him. But there were critics there as well – a woman next to me kept muttering her objections at every statement he made. Still, she stayed for the whole event. On the way out I asked another man what he thought. He replied, “I’m going to vote for him…..It’s time we had a man of God in the office for a change.” Perhaps – but I’m not convinced that view is widely shared among New Hampshire voters. As I noted in my last post summarizing the state of the Republican race here,  I predicted that both Cruz’ and Rubio’s support would slip after the afterglow of their Iowa showings began to recede, and that Kasich and Bush would pick up some of that support.

P.S.  I’ll try to get a short post up tomorrow assessing the Democratic race here, but it’s a busy day.