Are there second acts in American politics? Back at the end of September, Carly Fiorina’s political star appeared to be on the rise. After what most viewed as a dominating performance in the debate among second-tier Republican candidates, Fiorina was promoted to the big stage for the second major Republican debate, and again she received critical acclaim from political pundits for her performance. Those positive reviews translated into increased media coverage, which in turn boosted her name recognition and polling support. Over a two-month period, from August through Oct. 1, Fiorina gained almost 8% in national aggregate polling trackers, and she moved into a closely-grouped cluster of three candidates, along with Jeb Bush and Marco Rubio, who seemed poise to take the lead if the two frontrunners, Donald Trump and Ben Carson, faltered. She made similar strides in the key state of New Hampshire, which holds the first-in-the-nation primary; there at least two polls in late September placed her second, trailing only Trump by about 5%. Unfortunately for Fiorina, she has not been able to maintain her polling momentum. Since Oct. 1, she has lost almost all of her previous two month’s gains in national polls, and she has dropped below almost every one of her rivals in recent New Hampshire polls as well. With only two months before New Hampshire’s primary, Fiorina is stumping across the state in a bid to staunch the hemorrhaging in her political support there. Last night she hosted a campaign event in West Lebanon NH, and your intrepid political blogger was there. Here’s what I saw: 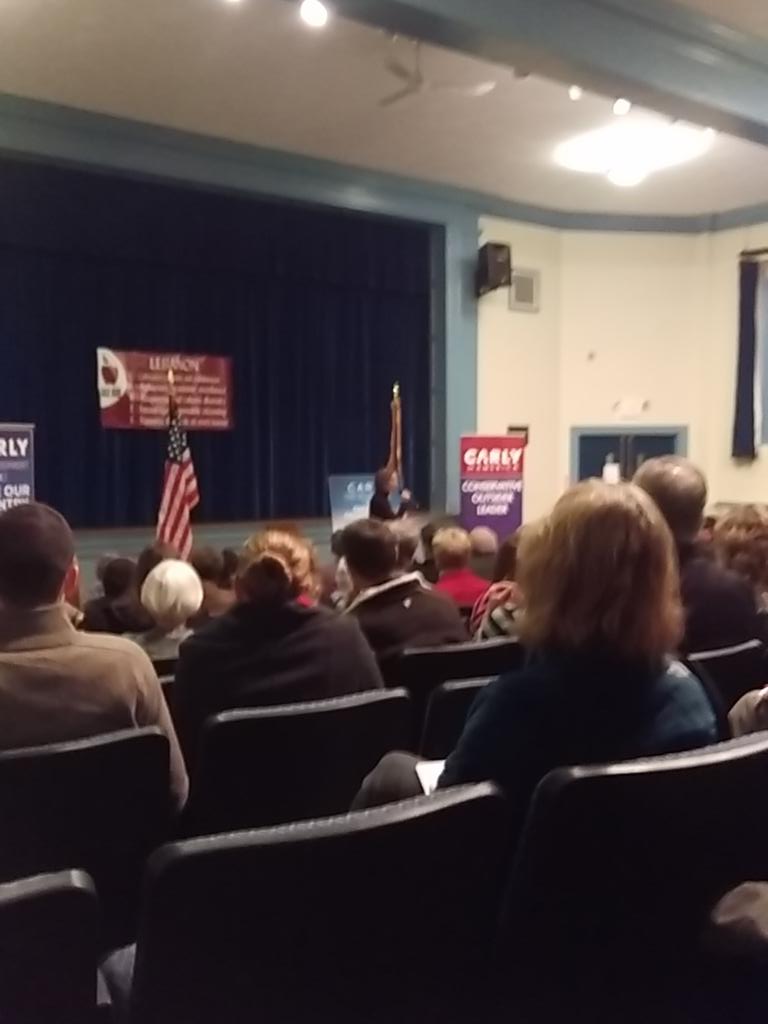 Fiorina was introduced by Marilinda Garcia, a rising Republican star who lost by 10% in New Hampshire’s 2nd Congressional district to Democrat incumbent Annie Kuster in 2014. The auditorium in which Fiorina spoke was not quite full – I guesstimated attendance at about 150 people – but it was a far better turnout than the almost empty room that apparently greeted Fiorina at an Iowa Town Hall event on Monday. A show of hands indicated that most of the attendees were Republicans, and they appeared generally well disposed to Fiorina and her message, with frequent applause for her comments throughout the night. Before Fiorina took the stage, we recited the Pledge of Allegiance, and also sang the Star-Spangled Banner – a first at any of the campaign events I attended this year.

Fiorina began the night by noting that she started out this campaign back in May as “18th out of 17 candidates” – pollsters didn’t bother to include her name in polls – and so she appreciated the strong support she is receiving in New Hampshire. She then provided a brief biographical overview, beginning with her college education at Stanford (a Medieval History and Philosophy major!), her brief dalliance with a possible career in law and her decision to enter business school instead. After graduation she moved up the ranks in various companies, starting with AT&T and culminating in her controversial tenure as Hewlett Packard CEO. Only in America, she told the audience, could someone starting from her humble roots work their way up the corporate ladder to become a CEO of a major company and a candidate for the Presidency.

During the overview she acknowledged her bout with breast cancer (she had a double mastectomy) and the loss of her daughter Lori to drug addiction. These events, she said, made her particularly sensitive to issues of health care and the opiate addiction problem that has become so prominent in New Hampshire. She reminded the audience that she had probably met more world leaders than any other presidential candidate (with the exception of Clinton) due to her business dealings and subsequent role on a CIA advisory board and work with various international NGO’s such as Opportunity International. This made her uniquely qualified to deal with international issues.

She then turned to critiquing the state of American politics, calling the current government both “corrupt” and “inept” – characterizations that she said were shared by most Americans according to polling data. The corruption is because “the professional governing class” isn’t held accountable – politicians win reelection after reelection and bureaucrats are never threatened with removal. As evidence of ineptness, she noted that neither of the terrorists behind the San Bernardino attacks was on anybody’s watch list. In contrast to this lack of accountability, as head of Hewlett-Packard she had to file regular progress reports documenting progress, and if she tried to cook the books she would have been held criminally liable.

A good part of Fiorina’s appeal – one she played up repeatedly in her talk and in the question and answer portion (see below) – is that she comes from the private sector, and thus can claim to understand how technological innovation is changing the world. In this vein she scolded Congress for debating the details of the USA Patriot act, arguing that technological change had made the debate over a more than decade-old piece of legislation obsolete, but that professional politicians didn’t realize this. At one point she quipped that the best way to empower citizens was to makes sure everyone who still had flip phones threw them away. More generally, she touted technology, particularly communication innovations, as the key to allowing citizens to hold government more accountable. “Young people understand this,” she noted. During the Q&A, again touting the virtue of citizen involvement via technology, she said “there is app for citizen government” that allow for greater interaction between citizens and government officials.

She then launched into a discussion of her policy positions saying that as president she would be held accountable for achieving six things. Much of what she said, beginning with her “On Day 1 as President I will make two phone calls” – one to “her good friend Bibi” Netanyahu and one to the Ayatollah of Iran – is familiar to those who have watched her debate performances. Her first objective would be defeating ISIS. Here she made a direct attack on Donald Trump who, she said, was attempting to deflect attention from his lack of a plan for defeating ISIS by trying to focus attention on blocking Muslims from immigrating into the country. Interestingly, her swipe at Trump elicited strong applause from the audience. Fiorina would continue bombing, while expanding U.S. special operations. Pointedly, she did not call for more U.S. boots on the ground, but instead proposed reaching out to Arab nations to solicit more ground forces from them.

To fix immigration, in addition to securing the borders Fiorina would move to a “pro-American” immigration policy which presumably means a policy that lets in immigrants with desirable economic skills. She agrees with Bernie Sanders about the dangers of “crony capitalism”, but she disagrees with his solution. To Fiorina, crony capitalism works through its connections with government, and thus the cure is to reduce government, including repealing Obamacare. Here she returned to her history as a cancer survivor, acknowledging she understands what it is to be someone with a preexisting condition. But she would return responsibility for health insurance to the states, allowing them to establish high-risk pools for those with preexisting conditions. More generally, she believes in a free-market approach to health care based on informational transparency, in which patients fully understand the proposed treatments for health problems, their costs, and the treatment outcomes, and choose accordingly.

She noted that Americans are experiencing a period of “disquiet” that we are losing the character of this nation. To restore our belief in life, liberty and the pursuit of happiness we must find common ground on issues. Here she cited what she said was a growing consensus for defunding Planned Parenthood. She again pushed her tax simplification plan – “We can reduce the tax code to three pages” (this drew maybe the biggest applause of the night) – and touted the virtues of zero-based budgeting (without explaining what it entails) – “It’s the way you budget at home.” She finished by contrasting “managers” – “those who accept things as they are” – with “leaders” who work to change the status quo. Presumably she would be a leader!

Fiorina then opened up the floor for questions. As is typically the case, the Q&A session provided some of the night’s most interesting moments. Fiorina took six questions, touching on immigration reform, climate change, health care, Planned Parenthood, how to make government work, and dealing with the Russians.

When asked why so much of the immigration reform centered on removing “migrant farm workers” and other laborers, rather than terrorists, Fiorina responded, “You must be talking about sanctuary cities” which she opposes because they allow local governments to flout federal law. Regarding climate change, she expressed disagreement with those who cite it as the greatest national security threat (to great applause) and said she favored making the U.S. an “energy powerhouse” by making it easier to export “cleaner” domestic oil and coal. “Nuclear power has to be put back on the table too,” she noted, again to much applause. She defended her push to defund Planned Parenthood by noting that it was not fair to subsidize that organization with federal tax dollars while denying that money to community health centers that provide some of the same services. Pointedly, to the best of my recollection, Fiorina did not mention the infamous “baby killing” video the entire night. When asked how to deal with Russia, Fiorina responded, “I won’t talk. I will act” (again generating huge applause) by building up the 6th Fleet, instituting a no-fly zone in Syria, and developing anti-missile technology. Only after these are in place would she consider sitting down with Putin.

After taking questions, Fiorina finished up the night by citing two ladies – “Lady Liberty” and “Lady Justice” – as symbols of what this country stands for, and what must be restored to make it great again. “We must be one nation, under God,” she reminded the audience before asking for their vote. The audience gave her a standing ovation, and she spent significant time afterward meeting, greeting, and posing for selfies before heading out the back way to Manchester. 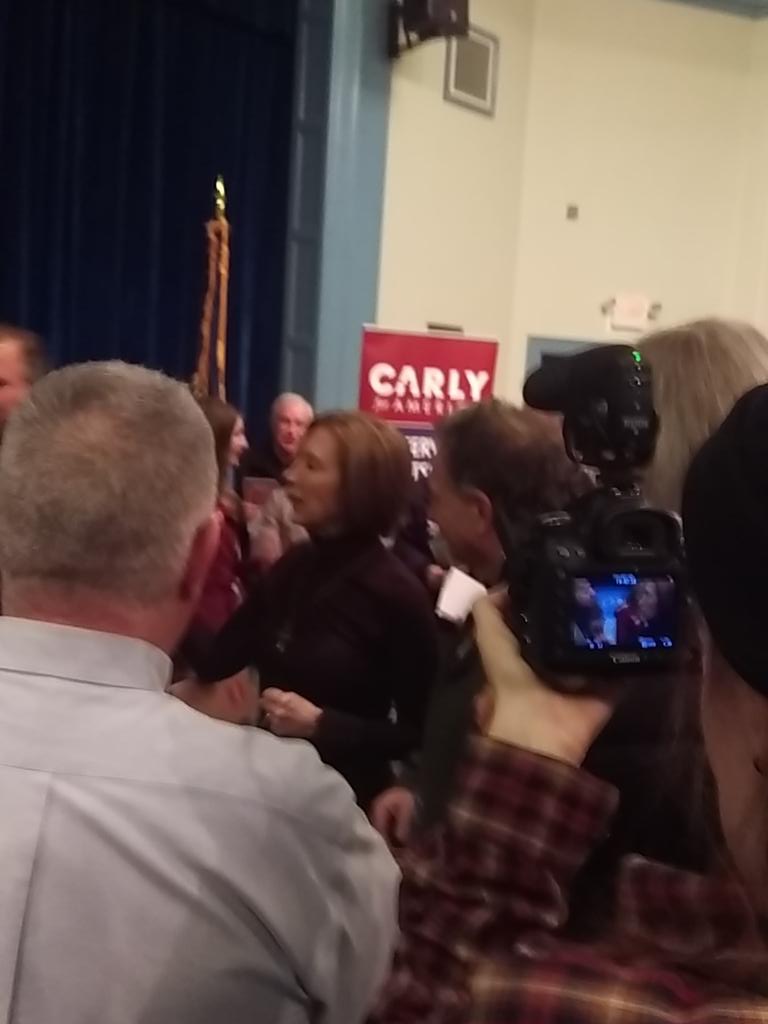 On paper, Fiorina would appear to be the type of candidate whose background and policy positions would appeal to the typical moderate New Hampshire Republican. But after her initial polling surge two months ago, she has struggled to regain traction here. One wonders how much of that has to do with her comments regarding the infamous Planned Parenthood video, which may have cost her some support among women and moderate voters. But it may also be the case that, as with other more moderate Republican candidates like Christie and Kasich, Trump is simply taking up too much of the political oxygen right now to give Fiorina any breathing room. Barring an implosion on his part (and it’s hard to see what more he can say to provoke one!) Fiorina is likely to continue struggling for the much-touted second or third-place ticket out of New Hampshire. History is not kind to second acts in American politics, and it may be that Fiorina’s fall polling surge came a couple months too early. This makes the remaining three debate performances before the Iowa caucus all the more crucial to her candidacy. While she remains a longshot to win the Republican nomination, strong debate performances might boost her polling support and electoral performance and perhaps, eventually, put her in line for a cabinet or other administrative position (U.S. Trade Representative? Commerce?) in a Republican administration or maybe even someone’s vice presidential candidate. She said more than once during last night’s event that she was uniquely suited to defeating Hillary Clinton – a point that her staff made to me as well after her speech. Let’s see if the eventual Republican nominee believes that to be true. Meanwhile, like a bevy of other Republican candidates, she soldiers on, another player in this uniquely American electoral spectacle that is the 2016 race for the presidency in New Hampshire.