The Supreme Court’s historic decision yesterday in Obergefell v. Hodges to legalize same-sex marriage in all 50 states illustrates a point my students have heard me make for many years: the Court is a fundamentally political institution, one whose members are deeply concerned about maintaining its independence and legitimacy.  The result, as the Obergefell decision reminds us, is that the Court will rarely allow itself to get out in front, or fall very much behind, prevailing public opinion.

We can see this quite clearly by tracking the Court’s decision in a series of cases regarding gay rights, from Bowers v. Hardwick  through the Romer, Lawrence and Windsor cases and culminating in the decision announced yesterday in Obergefell v. Hodges. Viewed chronologically, the cases trace a steady progression in the evolution of Court doctrine, from upholding a Georgia law in 1986 criminalizing sodomy to yesterday’s landmark ruling that the Fourteenth Amendment’s due process and equal protection clauses requires a State to license a marriage between two people of the same sex.

In this regard, many observers likened yesterday’s decision to the Court’s 1954 ruling in Brown v. Board that outlawed segregated public school systems. But the reality is that, as Gerald Rosenberg persuasively argues, the Brown decision did little by itself to move public school desegregation forward. More generally, Rosenberg argues, in the absence of broad-based political support and legislative action by Congress, the Court is a poor vehicle for enacting social change. And, in fact, the evidence suggests that it wasn’t until passage by Congress of the 1964 Civil Rights and the 1965 Voting Rights acts that the barriers to racial discrimination began to fall.

Indeed, more often than not we have seen instances of the Court acting on behalf of temporary majorities, often during wartime, to curtail civil rights and liberties of minority groups, rather than protecting them.  More generally, as Robert Dahl first posited in his famous 1957 article, as a political actor the Court’s rulings tend to owe more to prevailing political opinion than to careful legal reasoning based on the Constitution and statute.

Why is the Court so responsive to majority public opinion? Dahl posited an indirect relationship, in which presidents and members of the Senate who are elected by – and thus are responsive to – public opinion choose judges who share their political preferences. Through this means the Court tends to be composed of justices whose views are not likely to be too far out of step with the mainstream. Other scholars have argued that the relationship is more direct, with individual justices actually responding directly to public opinion.  Whatever the mechanism and motivation, however, this line of reasoning suggests that the evolution of Court doctrine regarding gay marriage is not an instance of the Court bucking majority opinion to protect the rights of a minority class, but in fact is characteristic of how the Court’s legal interpretations respond to evolving social norms more generally. In this respect, Chief Justice Roberts is right – yesterday’s decision was not about the Constitution, at least not directly. As Dahl writes, “[T]he court cannot act strictly as a legal institution. It must… choose among controversial alternatives of public policy by appealing to at least some criteria on questions of fact and value that cannot be found in or deduced from precedent, statute and the Constitution.” And so it seems to be with the Court’s evolving rulings regarding gay rights – an evolution that seems driven not by legal precedent or doctrine so much as by changing public mores.

My interpretation may prove troubling to those who believe the Court’s function in the Madisonian system of shared powers is not to be a democratic institution, but instead is to check the excesses of legislative majorities. On the other hand, it may comfort those (like Chief Justice Roberts!) who complain that the Court is too willing to issue rulings on controversial matters that are better left to the people to resolve, working through their elected representatives. My response is that in most instances, the Court interjects itself into debates only when it is reasonably persuaded that public opinion has begun to crystallize. When it comes to gay marriage, the reality is that there has been a sea change in attitudes since Congress passed the Defense of Marriage Act in 1996, so that by the time the Court issued its ruling yesterday, it was increasingly hard to argue, as the four justices in the minority in yesterday’s decision would have us believe, that the Court decision short-circuited an ongoing debate.  Instead, as Scalia foresaw back in 2003 in his dissent in the Lawrence case, the Court’s ruling then striking down the Texas anti-sodomy law practically guaranteed that it would find a constitutional basis for same-sex marriage sooner or later. But it would be another decade before the Court, finally persuaded regarding the direction of public opinion, chose to take that historic step.  It did so in concert with evolving public opinion on the matter, as reflected in this Pew chart. 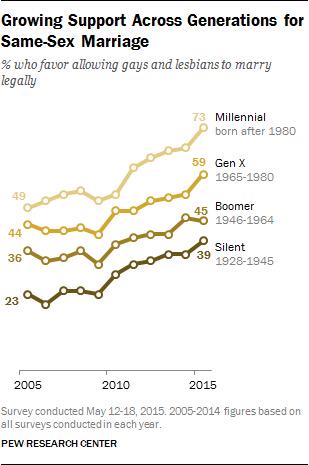 It indicates a dramatic growth across all generations during the last decade in support for same-sex marriage. Indeed, 37 states and the District of Columbia had already ratified same sex marriage prior to yesterday’s ruling.  If the Court hoped to get on the train of public opinion before it left the station, yesterday’s ruling was almost inevitable.

As is often the case, then, the Court’s intervention into a political debate did not likely change the outcome so much as provide constitutional cover for a result toward which the national conversation was already headed. In so doing, it insured that the Court would remain a relevant political player, but not in a way that jeopardized its legitimacy to articulate bedrock values. To be sure, providing a legal foundation to justify and explain a political outcome is not an insignificant role – by providing a constitutional imprimatur, it puts popular sentiment on a more enduring basis. But a process that ratifies a democratic outcome, rather than determines it, is also less controversial, and perhaps more reassuring, to those who worry about the Court’s anti-democratic tendencies. In instances in which it lacks strong popular support, conversely, the Court is not likely to move social policy on its own. While not the sign of “the least dangerous branch”, it does suggest it is not nearly as threatening as its harshest critics contend in the aftermath of yesterday’s decision. In this respect, I think Dahl had it correct when he concluded his study of the Court by writing, “[I]t is doubtful that the fundamental conditions of liberty in this country have been altered by more than a hair’s breadth as a result of these [Court] decisions. However, let us give the Court its due: it is little enough.” So it is.