Whenever presidents appear politically vulnerable, as reflected in declining approval ratings, a failure to pass major policy initiatives, or in anticipation of a major electoral defeat, supporters – not wanting to attack the President directly – begin to look for suitable scapegoats.  Typically that means targeting seniors members of the President’s White House staff, in the belief that their bad advice is responsible for the President’s weakened state.

Not surprisingly, given the prevailing media perceptions regarding the precarious state of Obama’s presidency, we have seen precisely this “the staff must go” dynamic at play in the last month, starting with this online column by Leslie Gelb.  Gelb’s column begins:

“The negative, even dismissive, talk about the Obama White House has reached a critical point. The president must change key personnel now. Unless he speedily sets up a new team, he will be reduced to a speechmaker. It’s mostly a matter of relocating the Chicago and campaign crowd who surround the Oval Office and inserting people with proven records of getting things done in Washington and the world.”

We have seen this dynamic before, of course. Early in the Clinton presidency, after the health care debacle and a series of other missteps (the near failure to pass a budget, gays in the military, the haircut that allegedly closed LA X airport), Clinton – his poll numbers sagging – revamped his White House staff by bringing in experienced Washington hands – David Gergen, Leon Panetta – who could “get things done in Washington and the world.”  They helped stop the bleeding, made the trains run on time and are generally credited with stabilizing his administration.

But this most recent version of this media game has an interesting twist. Although Gelb clearly takes aim at almost the entire upper echelon of Obama’s White House staff – particularly the “campaign crowd” – the reaction among the Washington punditry has centered on his advice that Obama fire his chief of staff Rahm Emanuel.   This is not surprising – the progressive win of the Democratic Party, particularly the netroots who served as Obama’s shock troops during the campaign, have never been happy with Emanuel.  They view him as a closet Clintonite and political insider who is far too willing to sacrifice progressive ideals – the public option, closing Guantanamo, ending trials by military commissions – as a necessary price to close deals with moderates.   Because Gelb, a longtime Washington foreign policy hand, is not normally associated with this progressive wing, his article provided the ideal cover to renew the attack by the netroots on Emanuel.

In so doing, however, progressives have run into an obstacle.  Emanuel – a veteran of the Clinton White House and a former member of Congress – is an incredibly skilled infighter with strong media connections and, unlike Clinton’s chief of staff Mack McLarty, he is not going to go quietly. Within days of Gelb’s column, Emanuel – or someone close to him – struck back via an extraordinary Dana Milbank column in the Washington Post that essentially laid all the blame for Obama’s failures to date on the President’s failure to listen to Emanuel!  The sheer audacity of this strategy – blaming the President to save one’s job! – led many to immediately dismiss Emanuel as the source of the story.   (Milbank denied that he had talked to Emanuel).  I happen to disagree – I think this is precisely what Rahmbo would do.  Remember First Blood?  Sly Stallone – Rambo, the ex Vietnam/Clinton veteran – is walked across the bridge by local police officers/Obama’s campaign team and told to leave town/resign.  What does he do?  He reverses course and goes on a one-man rampage, annihilating the inexperienced law enforcement officers/campaign team who have no idea what they are getting into when they provoked him/leaked to Gelb in the first place. Only his former commander/Bill Clinton understands, but he is ignored.

Really. You can’t make this  up.  Art predicting life.  I can’t wait for the sequel.

Emanuel’s attack on the President is, in my view, classic Rahmbo: direct and very effective, primarily because the case he makes on his behalf (or that someone makes on his behalf)  is hard to refute.  In several high profile instances, from Guantanamo to military commissions to where to try Khalid Sheikh Mohammed,  Obama has ended up backing away from his original choices in favor of Emanuel’s preferences.  It appears that pattern will repeat itself with health care, with the final outcome coming very close to Emanuel’s original negotiating end point.

In the aftermath of Milbank’s article, media pundits began taking sides, and a series of columns came out, based on anonymous sources (see, for example here and here) both supporting and attacking Emanuel.  And, in a rather extraordinarily public tongue lashing, the dean of Washington correspondents David Broder rebuked his colleague Milbank for portraying Obama “as a weakling and a chronic screw-up who is wrecking his administration despite everything that his chief of staff, Rahm Emanuel, can do to make things right.”

It is easy to dismiss this leaking and counterleaking as so much petty nonsense, the product of massive Washington egos engaged in a media food fight.  In fact, this is a crucial exchange that is liable to have important consequences for the Obama presidency.  It is important to realize that members of the White House staff have no independent base of power (unlike, say, cabinet members); all their influence derives directly from perceptions regarding how close they are to the President.  How often do they see him, and does he take their advice?  Emanuel understands only too well that if the prevailing impression in Washington becomes one that views him as losing access to the President, his influence – and therefore his ability to shape policy and run the White House – is over.

That’s why I believe Rahmbo struck back so forcefully, and in such a visible manner.  His ultimate target was not simply the media – it was the President.  Sometimes it’s easier for a senior staff member to say something the President must hear through the media than it is to tell him directly.  It will be interesting in the next several weeks to see if Obama signals his support for Emanuel through a well-placed public remark, photo op or other signaling device.

How will this dispute conclude? I believe that in the battle between the campaign loyalists and Emanuel – Rahmbo will draw first blood.  Obama may have liberal views, but tactically he is a pragmatist who has repeatedly demonstrated a preference for the safe course of action. He showed this early in his presidency, when White House counsel Greg Craig – a strong proponent of closing Guantanamo and of ending military commissions – was quietly removed after it became clear Guantanamo could not be closed immediately, if at all.  At the time, Craig’s firing was blamed on Emanuel:  “This has the fingerprints of Rahm Emanuel somewhere on it,” one expert close to the issue said.”

This tells me that if anyone resigns in the run-up to next fall’s midterms, it will be one of Obama’s campaign aides – Robert Gibbs, Valerie Jarrett, David Axelrod  – and not Emanuel.

All presidents and their senior campaign aides take office overestimating their capacity to initiate change.  They soon learn just how weak the presidency is.  Change, if it occurs at all, takes place in very tiny increments.  Emanuel, a Washington veteran with previous White House experience, understood this from day one in a way that Obama and his campaign loyalists have only gradually come to realize.   If he is smart, Obama will retain Emanuel.

In the meantime, before he makes a mistake and fires Rahmbo, President Obama should consider these fateful words spoken by Emanuel’s alter ego, Sly Stallone:  “Murdock.  I’m…coming…to…get You!”

You can see why no man, no law, no war – and likely no President – can stop him. 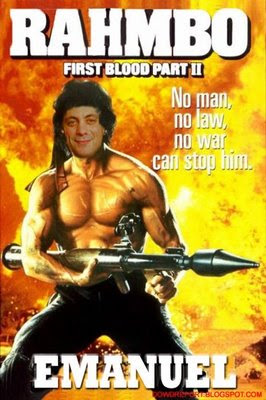