The dust covers of the Robert Langdon series novels have always contained their own secret codes. Normally one must wait to have the actual hard cover edition in hand, but some early hints have appeared. Secrets of the American cover include: The front cover contains an image from Alamy of one of the spiral staircases in a tower in the Sagrada Familia in Barcelona, Spain. The back cover contains the letters CGB in honor of Brown’s mother. Inside the O of Origin is a dot making it a circumpunct that figured prominently in the novel, The Lost Symbol.“The circumpunct. The symbol of the Source. The origin of all things” (TLS,459).” 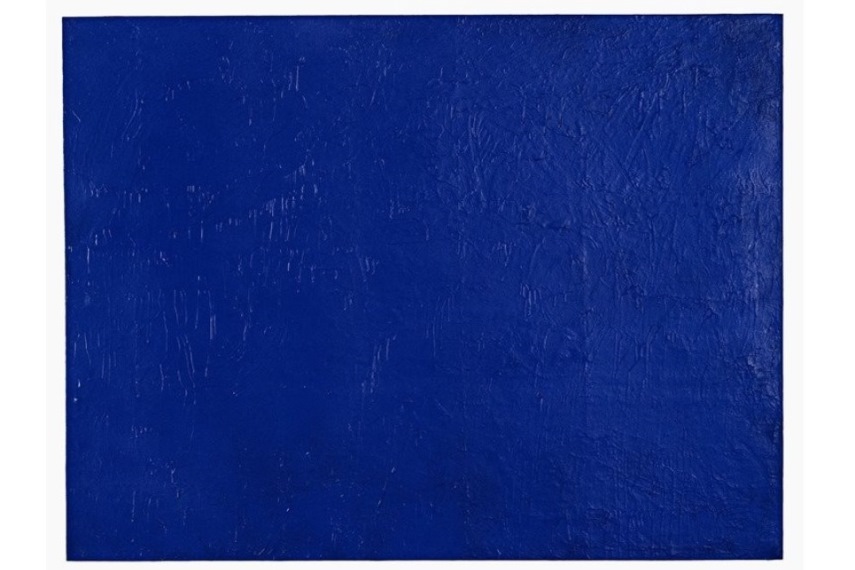 It’s likely that the predominant blue color that is used on the cover is International Klein Blue, the color that Yves Klein invented for his art piece known as The Swimming Pool. This artwork is first mentioned in Chapter 6 of Origin.

On front cover of Origin, there is a patch of “light” that appears on the upper left-hand corner of the design. The symbolism of the four cardinal directions associate the north-west direction with disaster, evil, destruction and darkness. In the Bible, the prophet Jeremiah says “Out of the north evil shall break forth upon all the inhabitants of the land” (Jeremiah 1:14). In Genesis 2:4-3:24, God expels Adam and Eve to the West and puts cherubim and a flaming sword on the East side to protect the tree of life. “So the Lord God banished him from the Garden of Eden to work the ground from which he had been taken.  After he drove the man out, he placed on the east side of the Garden of Eden cherubim and a flaming sword flashing back and forth to guard the way to the tree of life” (Genesis 2:4-3:24).

The subtle design on the cover of Origin depicts Barcelona Panots, which are hexagonal paving tile that are used for the sidewalks in Barcelona. When arranged together properly, the tiles depict an undersea landscape, which includes sea flora, plankton, and other microorganisms. These tiles are first mentioned in chapter 49 of Origin.

The words “where do we come from where are we going” appear in boldface type throughout the plot summary on the inside of the book jacket.  This is a reference to, among others, Paul Gauguin’s 1897-98 painting Where do we come from? What are we? Where are we going?, which depicts a scene from Tahiti and in the upper left hand corner has written in French: “D’où venons nous. . . . Où allons nous.”

The British/Australian, Spanish and German editions respectively all feature  a prominent landmark of the city of Barcelona, namely the Sagrada Family Cathedral, the unfinished project of the master Antoni Gaudi (1852–1926). In addition there is a spiral in different designs, a feature that is most prominent on the American cover. The Norwegian cover had both the spiral and the Sagrada Cathedral. One spiral offered on Dan Brown’s Facebook page is that of the majestic staircase of the Cotton House of Barcelona. The actual cover was released on June 27, 2017 with an accompanying press release.

DAN BROWN’S ORIGIN TO BE PUBLISHED ON OCTOBER 3, 2017 JACKET AND LOCATION VIDEO REVEALED TODAY AT 9:30 AM EST

New York, NY (June 27, 2017) 9:30 AM EST—Following much anticipation about the jacket, location, and content of this eagerly awaited new thriller by global publishing phenomenon Dan Brown, Doubleday will release the North American jacket of ORIGIN and themes from the book today at 9:30 AM EST.

Since the September 2016 announcement of the publication, excitement for the release of the new novel featuring Brown’s unforgettable protagonist, Harvard symbologist Robert Langdon, has had fans clamoring for more information. Now for the first time, readers worldwide will discover the setting for the action as well as key elements in the forthcoming thriller. Unfolding entirely in Spain—Madrid, Barcelona, Seville, and Bilbao, the home of the Guggenheim Museum—ORIGIN thrusts Langdon into the intersection of two of humankind’s most enduring questions:

Where do we come from? Where are we going?

In keeping with his trademark style, Brown interweaves codes, symbols, science, religion, history, art, and architecture with a decidedly fresh twist; the art is modern and the science taps into the coolest cutting-edge technology available today.

Doubleday will release this stunningly inventive new novel from the world’s most popular thriller writer in the U.S. and Canada on October 3, 2017; it will also be available as an ebook and an audiobook from Penguin Random House Audio. ORIGIN will be published simultaneously in the U.K. by Transworld Publishers, a division of Penguin Random House. Additionally, a U.S. Spanish-language edition will be published by Vintage Espanol.

There are more than 200 million copies of Dan Brown’s books in print worldwide, and his novels have been translated into 56 languages.

Doubleday is an imprint of the Knopf Doubleday Publishing Group, which is a division of Penguin Random House LLC.

Penguin Random House, the world’s largest trade book publisher, is dedicated to its mission of nourishing a universal passion for reading by connecting authors and their writing with readers everywhere. The company, which employs more than 10,000 people globally, was formed on July 1, 2013, by Bertelsmann and Pearson, who own 53 percent and 47 percent, respectively. With nearly 250 independent imprints and brands on five continents, Penguin Random House comprises adult and children’s fiction and nonfiction print and digital English- and Spanish- language trade book publishing businesses in more than 20 countries worldwide. With over 15,000 new titles, and close to 800 million print, audio, and ebooks sold annually, Penguin Random House’s publishing lists include more than 60 Nobel Prize laureates and hundreds of the worlds most widely read authors.

On March 13, 2017 an official contest to design the cover was announced. The announcement offered another hint, namely that this time modern art would play a role. ”

Dan Brown is known for his trademark ability to blend codes, science, religion, history, and art seamlessly. In past novels, he has always explored the worlds of classical art — Botticelli, Da Vinci, Bernini, and beyond.

In Origin, however, there’s a twist…the art is modern. And so…using only modern art and the word “Origin” as your inspiration, let your creativity flow.”

In a twist one site offered to publish the rejected covers from the contest.

A list of the six finalists appeared including the early winner: JAMES MATUSZAK. You can, or at least could,  see the finalists here.

If you voted you were presented with  a video of Brown.

Here is the personalized signed copy for this author.

The winning selection was by Todd Erwin.Note that the pattern in the lower right reflects elements of the art of Piet Mondrian, whose arrival in the United States on October 3, 1940 aligns with the novel’s publication date.