While we dislike removing trees, sometimes we must. The Landscape Department is overseeing the removal of some hazardous trees in the main quad over winter recess. (We like removing trees over recesses–there is no pedestrian traffic and hopefully the ground will be frozen enough so we don’t make much of a mess.)  Since the trees are in a very prominent location, we’ve been consulting with the President’s Staff, as well as the Master Plan Committee, and all are in agreement about the removals. When finished, the look and feel of the main quad will be very different, yet much improved. And, in a bit of synergy, the work aligns with Campus Master Plan.

Most of the trees being removed are unhealthy, or becoming so, and hazardous. The best example is an Austrian Pine on the top of the hill below Hepburn.

The tree being removed is the one in front, and the tree behind is the identical species, for a health comparison. This tree is suffering from Diplodia Tip Blight, a fungus.  There are at least another 5 susceptible pines in the immediate vicinity, and the best (and most organic) control of this fungus is sanitation–removal of the infected tree before it can spread to others. We are taking care to remove as many of the dead needles from the area as well, as the fungus is present year round.

In the same area, a Blue Spruce on the north side of Stewart Hall has been declining for many years. It would be fair to say this tree is suffering from multiple maladies, many of which point to root problems. Its slight but still perilous lean towards the entrance of Stewart, along with its drastically compromised root system make this a hazardous tree.

The other trees all sit below the ledge, in the flat zone of the main quad. Let’s start with some history of the space. The Main Quad lies between Old Chapel Road and Mead Chapel, and has a beautiful ledge of Panton stone forming the hill right below Mead. Bounded by Old Stone Row and Hepburn/Mead/Gifford, this quad forms the core of the campus and has since early in the 20th century.

While this quad serves many functions, one of its primary uses in the past has been athletics–McCullough being the old Gymnasium. The area directly north of McCullough was used as both a practice football field, as well as a make-shift ice rink. 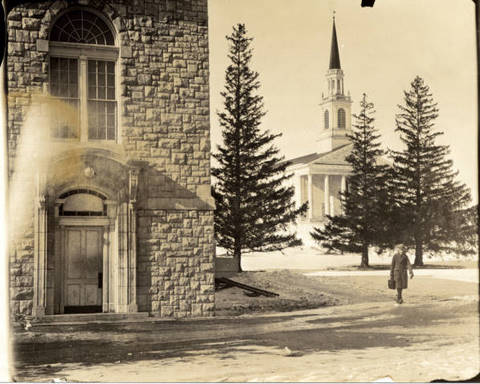 As you can see in the photos, that athletic surface was bounded by two rows of spruces, the remnants of which are still visible today. 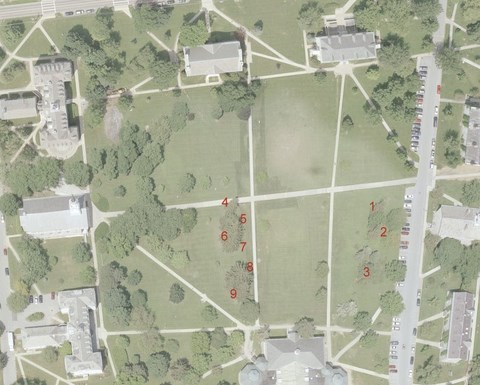 The main line of these trees sits at the base of the hill below Hepburn and Mead Chapel (trees 4-9 on aerial photo). All of these trees are Norway spruces, a tree native to central and northern Europe. These trees perform best in moist but well drained and acidic soil. In old age, they tend to lose their form and usefulness, becoming thin and less attractive. This seems to be particularly true in the Champlain Valley, in part due to the poor draining clay soils endemic to the region, and in part to the alkaline nature of the soil (the aforementioned Panton stone ledge being limestone, which all gardeners know makes soil less acidic).

The health of these trees deteriorates from south to north. The last two, trees 8 and 9, are great specimens, and tree 8 is particular is a noble tree worthy of a visit (go ahead, make it a lunch date).

Our department is doing some work on tree 8 to preserve it for future generations by adding some cables up in the crown to preserve its structure and integrity. I discovered a couple of years ago the trunk circumfrence on this tree is exactly one kindergarten class, all holding hands.

The next cluster of trees, numbers 4-7, are more troubling. The northern-most tree, tree number 4, is the one used as a lighted holiday tree in December. It is in good but not excellent health. Its proximity to the sidewalk and associated root compaction are evident in the thinning crown and slowing rate of growth. The other spruces in this row will age in a similar fashion, due to the aforementioned endemic soil type. We will be leaving the holiday tree in place.

Tree number 5 has some sad history.
A previous Ice Storm snapped the top off, and subsequent rot at that cut has left a cavity in the very top of the tree.

Unsafe to climb and inspect, this hole is at least two feet deep, but has potential to be greater. Norway Spruce is not a great compartmentalizer, (I’ve written about this before, but for a better explanation go here) and so the cavity and weakness in this tree may extend for many feet down the trunk. Unpredictable trees are hazardous, and given the location of this one, it needs to be removed before it fails and splits in half.

The last two in this first cluster appear from the outside to be in fine shape, although are certainly entering their mature years, as their growth rate appears to be slowing. The southern-most tree (#6 on the photo) shows some worrisome excavation at the root flare from squirrels as well as some girdling roots.

This root is grafted onto the main trunk, and cannot be removed without serious injury to the trunk of the tree. Closer inspection revealed the compromised root system’s impact in the upper trunk, where a large dead zone is starting to lose bark.

While it is nearly impossible to predict the future longevity of any tree, this tree‘s survival will be short at best. We will be removing this one. As to the tree next to it (#5), most trees, and particularly evergreens, when grown in groups or clusters such as these, tend to rely on each other for support. A single tree can adapt to wind load from all sides, while a group of trees only adapts to wind from the exposed sides. Removal of one tree often results in wind throw of the remaining tree, especially in clay soils, which cause shallow rooting. Furthermore, the proximity of these trees to each other would leave a very bare and unattractive side to the remaining tree, as the canopies have grown together. We will be removing this tree as well. (The lighted holiday tree, with its considerably smaller and less dense canopy, is less at risk for wind throw. Think of a sailboat with only one small sail unfurled.)

The second row of trees to the east of the old football field is a bit less noticeable, as there are only really two original trees (trees 1 & 2 on aerial photo) left in the original line. Both are Norway spruces and are directly opposite Old Chapel in the Main Quad.

The southernmost of these, with the larger trunk size of the two, is a very hazardous tree that needs to come down.

It probably got hit by lightning years ago, and now has a spiral shaped cavity running up its trunk for at least 15′.

This tree is also an immediate hazard, and needs to be removed.

Soil conditions are also impacting the last group of evergreens–a cluster of 4 fir trees (indicated by #3 on aerial photo) to the south of the previously discussed Norway spruces. Fir trees, while similar in appearance to spruces, have even less tolerance of heavy, wet soils. 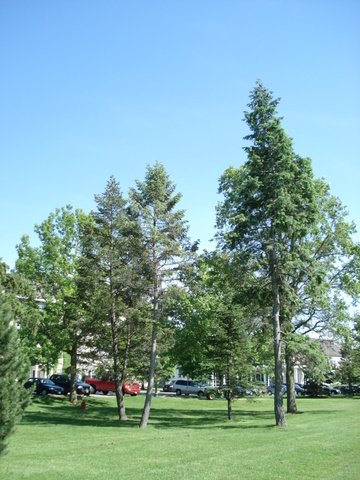 All four of these trees show very poor form for the species, have no limbs at all for the first third of the tree, and are quite thin above that. Douglas Fir is rare in Vermont, being native to the Rocky Mountains and Pacific Coast rainforest. There are some nice specimens of Douglas Fir up on the ledge west of Hadley House, thriving from the better soil conditions. This cluster in the Main Quad, however, is not enjoying the heavy clay soil, and are declining and dying. We will be removing these four as well.

All of our landscaping work is driven by the master plan , and this project is no exception. In one of my roles here, as the campus arborist, I know most of these trees need to be removed for the safety of the student population. In my other role, as a landscape designer, I also know these trees should be removed, but for a different reason.

The main quad is large, larger than many other quads at other schools, including Harvard Yard and the Dartmouth Green. Our main quad, however, doesn’t really feel much like a quad. The feeling of vastness, of this great expanse with no boundaries, is in large part due not to the size, but to the row of evergreens in the center.

While a long ways away, the buildings at the top of the hill should connect one side of the quad to the other, and put a more human feel on the space. The row of evergreens block this view to the western boundary, and create an artificial (although alive and green) wall.

The master plan calls for elimination of these evergreens. Imagine the view from Old Chapel Road, looking up to the three large buildings at the top of the hill. The quad will be bounded by beautiful stone buildings on all four sides, and feel like an enclosed and protected space. We will be limbing some of the maples up at the base of the hill to further enhance the effect–they are still young enough to prune with no real deleterious effect.

Ironically, the chips won’t go to the new Biomass plant. We value them much more for our compost operation, where they get mixed with the food waste from the dining halls, and then the finished compost is used on campus grounds. We never seem to have enough compost.

And, as I mentioned in a previous post, we are continually planting new trees, at the rate of about 3 ½ new trees to every one removed. Some gardeners look through catalogs all winter picking seeds. I visit local nurseries and tag trees grown by friends of mine to grace our campus. Yeah, it’s as much fun as it sounds, even in deep snow.