Snow or not, the subcontractors are doing the work for the Main Quad Tree Removal. They started by Old Chapel Road, and I arrived in time to watch the removal of tree number two, the tree that was struck by lightening. 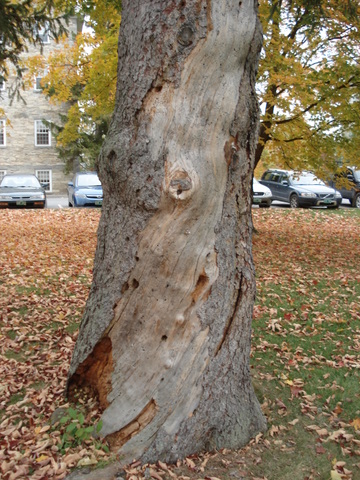 END_OF_DOCUMENT_TOKEN_TO_BE_REPLACED

Being part of the snow removal crew at Middlebury, it’s a little disconcerting to awaken on a lazy Sunday morning, look outside the window, and see it snowing like the dickens. So I go downstairs, start the coffee (priorities), boot the computer, and look at the Old Chapel Web Cam. Phew, not snowing on campus. Fooled by lake effect snow again.

Fortunately, we don’t live in Buffalo, but we certainly do get lake effect snow in the Champlain Valley. Lake Champlain is deceiving, as it is only 12 miles wide at the widest point, and much less wide down our way. It is, however, 125 miles long, north to south. (While we’re at it, average depth is 65 feet, with the deepest part a whopping 400 feet. That’s down where I used to live in Charlotte, and I can remember getting the heebies cross country skiing over that area when the lake completely froze one year. The lake is about 700 square miles). Lake Effectsnow requires several meteorological items to align, the major two being fetch and temperature. Fetch is simply the wind blowing across the lake, picking up moisture.  The fetch needs to be at least 100 km, so the wind on Lake Champlain needs to be from the NNW, which it was this morning. There is a great paper (PDF) studying this phenomenon published by the Burlington Office of the National Weather Service. The updated forecast just called for several tenths of an inch more snow through 2 PM.

END_OF_DOCUMENT_TOKEN_TO_BE_REPLACED

A new category in the Middland blog, and a guest post to boot. I’m sure most of you have seen the new plaza at McCullough, but have you noticed the rocks out there? END_OF_DOCUMENT_TOKEN_TO_BE_REPLACED
Here at Middlebury we seemed to have missed the brunt of the storm all around us. Trees are down all around Lake Dunmore, East Middlebury, and up into Huntington. No major tree damage here, although some Weeping Willows look like the base of the chair you sit in after a haircut-we’ll be picking up sticks for a day or so. Snow Reports from around the area include 6″ in Cornwall, and 9″ in Bridport, while on campus we only seemed to be shoveling 3″. Our peak wind gust was 48 MPH, from the southeast at 2 PM. Some brave souls out making snowmen on Battell Beach went inside pretty quickly after that…
The National Weather Service is getting all excited about breaking the record of the latest date of first measurable snowfall (measurable meaning more than .1″). Being that they keep the record in Burlington, which didn’t get snow yesterday, they are poised to break it tomorrow. I never get too excited about records, what the hottest day was, the coldest, all that. It’s like baseball statistics-dry, interesting on the periphery, but not riveting reading.
Here in Middlebury we got about 1/10th of an inch, exactly .04″ in liquid form. (The weather station melts the snow and pretends it is rain.) The sidewalks and roads were warm enough to melt the snow as well, so facilities got this one off (yea!). Look for colder weather this week, and a big storm on Wednesday, the jury is still out as to amount of rain/snow/sleet/junk that may fall.
While we dislike removing trees, sometimes we must. The Landscape Department is overseeing the removal of some hazardous trees in the main quad over winter recess. (We like removing trees over recesses–there is no pedestrian traffic and hopefully the ground will be frozen enough so we don’t make much of a mess.)  Since the trees are in a very prominent location, we’ve been consulting with the President’s Staff, as well as the Master Plan Committee, and all are in agreement about the removals. When finished, the look and feel of the main quad will be very different, yet much improved. And, in a bit of synergy, the work aligns with Campus Master Plan. END_OF_DOCUMENT_TOKEN_TO_BE_REPLACED