I fear this may be the last post this year about things in bloom. I was trekking across a tiny dusting of snow on top of Mt. Abe on Monday after all. There are plenty of things in bloom: asters, Japanese Anemone, still some Black Eyed Susan. But I’m writing about a tree, of sorts, Witch Hazel, Hamamelis virginiana. 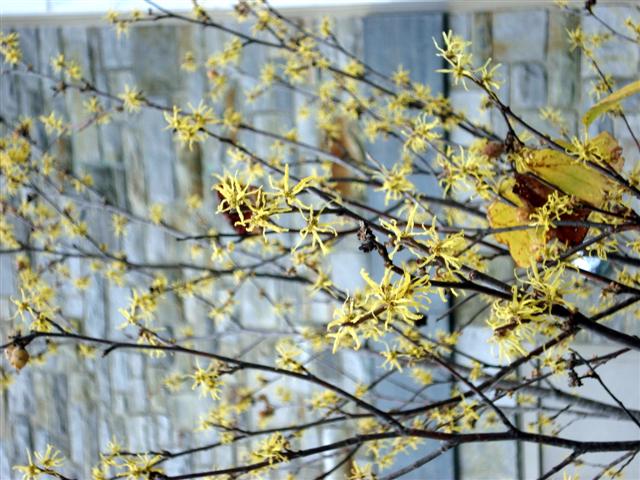 The line between tree and shrub can often blur, so I expect some grief from calling Witch Hazel a tree. One in Hartford, Ct. recently clocked in at 20 feet tall with an 18″ trunk, and I’ve read of one in the Virgina Appalachians with a 30′ spread and a trunk circumference of 52″. In reality, it is a very large shrub, with older specimens forming clumps of small trees.

And it is in bloom now. Not a mistake, its normal timing for bloom is when the leaves start falling. This leads to one common criticism of the plant-the fact that it blooms while the leaves are still on, hiding them. As you can see from the accompanying pictures, this doesn’t seem to be a problem this year, nor was it in the previous one.  Four bright yellow ribbon like petals extend from the center of the flower, a perfect one containing both male and female parts. Pollination is done by insects on warm days, but the flowers are also capable of self-pollination (wise insurance this time of year). The pollen remains in the ovules until spring when pollination officially occurs and the seeds start to develop. The joy of fall blooms is the lack of heat to blast them off. The flowers are effective on a witch hazel for at least 3 weeks. It is also the only woody northern plant to flower and have mature fruits at the same time. The woody capsules hold the seeds until late fall, and then utilize my favorite seed dispersal method, explosion. Splitting open in four, the seeds go for up to 30′. Cardinals and ruffed grouse are said to feed on the seeds, as well as turkeys and squirrels. 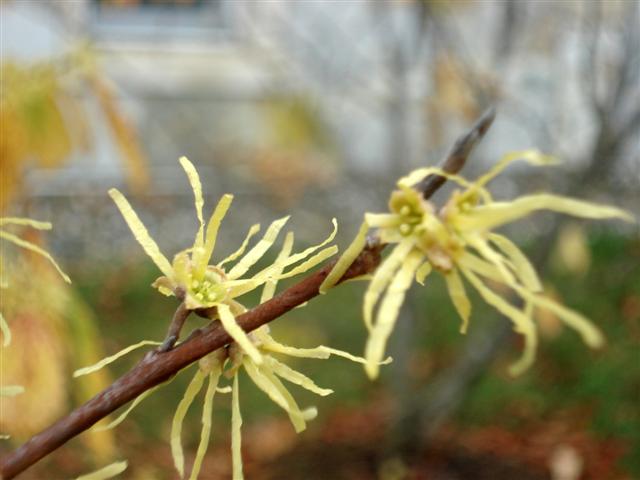 Fall color of the leaves is a yellow gold, but not particularly bright. In the growing season, the leaves have been described as “lettuce green”, but we’re talking iceberg here, not a rich romaine. The shape resembles that of the hazels, hence the common name. Native to most of the east, except the colder areas of Vermont, Maine, and New Hampshire, the witch hazel favors wooded shady sites, but will thrive in sun given protection from severe drought and/or heat. Twigs, stems, and inner bark contain astringent properties, and it is this plant that is the source of Witch Hazel extract in drug stores. The forked stems are also the preferred wood for dowsing rods.

Some Witch Hazels can be found on the east side of the Axinn Center, in the Garden of the Seasons, in Ridgeline, and at 97 Adirondack.

One thought on “Witch Hazel”