The Courts in the Age of Trump

President Trump has appointed a record number of judges to the federal courts and has nominated two judges to the U.S. Supreme Court.  These jurists may reshape the courts for a generation or more.  Do they pose a threat to fundamental rights and equality under law?  Will Trump-appointed judges take the courts in the right or wrong direction?

Two of the nation’s leading legal minds will provide contrasting answers to this question and take questions from the audience. John O. McGinnis is the George C. Dix Professor of Constitutional Law at Northwestern University. In the administration of President George H. W. Bush, Professor McGinnis served as Deputy Assistant Attorney General at the Department of Justice, Office of Legal Counsel. He is the author of Originalism and the Good Constitution (Harvard 2013) (with M. Rappaport) and Accelerating Democracy: Transforming Government Through Technology (Princeton 2013). He is a past winner of the Paul Bator Award given by the Federalist Society to an outstanding academic under 40. A graduate of Harvard College and Harvard Law School, he was an editor of the Harvard Law Review. He also has an MA degree from Balliol College, Oxford, in philosophy and theology. 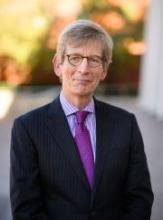 James E. Fleming is The Honorable Paul J. Liacos Professor of Law at Boston University School of Law. One of the country’s leading theorists of constitutional interpretation, he is author of six books, including Fidelity to Our Imperfect Constitution: For Moral Readings and Against Originalisms (Oxford, 2015), Ordered Liberty: Rights, Responsibilities, and Virtues (Harvard, 2013), Securing Constitutional Democracy (Chicago, 2007), and Constitutional Interpretation: The Basic Questions (Oxford, 2007). He has also authored dozens of articles in leading law reviews. Mr. Fleming has previously held posts at Fordham University School of Law and served as a litigation attorney at Cravath, Swaine & Moore. A graduate of the University of Missouri, he also holds a Ph.D. from Princeton University and a J.D. from Harvard Law School.