One of the putative benefits of Soylent, the brand new food substitute getting coverage in the NYTimes, Slate, and so on, is its environmental impact.  Soylent is a nutritional drink, designed in 2013 by wunderkind and tech advocate Rob Rhinehart to solve the problems associated with food.  In short, it takes too long to prepare, is too expensive, and takes too long to consume.  In the video below, Rhinehart explains in more detail what Soylent is all about:

Soylent solves all of that.  It provides (in theory) all the necessary nutrition you need in an easy-to-make drink for (potentially) less than the price of eating out or cooking yourself.  Since it can be stored, it contributes to less waste; it does not require as much carbon emissions per milligram of protein as, say, factory-produced beef; and can be produced with all-organic ingredients.  Environmentally speaking, what’s not to love?

And yet, I can’t quite get behind it.  For one, what we eat is not simply dictated by necessity, but is a part of and influenced by our culture.  We eat not just to input energy into a machine, but because the act of eating affects our mood – we place different signifiers on things like spiciness, texture, and so on.  While Soylent is customizable, it’s not clear that it would ever approach the diversity of human gastronomy.

And, c’mon, what kind of a psycho would willingly replace this with Soylent?:

Second, I’m not convinced that Soylent is necessarily always the cheaper option for everyone.  It may be only $3 per package, but that’s substantially more than it costs to make a pot of rice and beans (baller, if you do it right), or to buy an order of koshari in Cairo.

Finally, while Soylent’s claims to promote a good environmental impact are somewhat admirable, the environmental problems it putatively addresses can and should be addressed by other means.  Why do we allow factory farms to overproduce poorly managed cattle and butcher them in appalling conditions?  Why do we allow agricultural producers to mass clear land and plant monocrops?  Why do we have all of this food waste, and over-processed crap?

Ultimately, Soylent seems like another unnecessarily hi-tech solution based on consuming our way out of problems we created by consumption.  It speaks more to something gone horribly wrong in our society: so many people feel so hammered by time and life constraints that even the act of eating has become one more thing to shove aside in the mad dash to… wherever.

He Speaks for the Trees

I just read The Lorax to my kids again (and did funny voices to boot, which made my wife visibly cringe).  Everytime I do, however, I think about this really stellar and well-written article by Maniates called “Individualization: Plant a Tree, Buy a Bike, Save the World?”

The article itself – very accessible, especially for an academic piece – gives a great description of an underlying problem in an otherwise sweet little book.  (And I specifically set up storytime with this book to encourage the kids to take care of the earth).  The short version (read the whole thing!) is that Seuss’ fable presents the solution to environmental crises as occurring through the aggregate of individual action.  In other words, if committed people can motivate themselves to plant trees, take care of them, and make the right purchases, the world will get better.  Noticeably absent from Seuss’ tale, however, are things like polluter pays laws, and regulations that would have stopped the Once-ler from destroying the Truffula forest in the first place – or at least held him legally and financially responsible after he did.

Not picking on Seuss, though.  It’s a nice book.  But we should be aware that individual action, especially in a market economy, will only have very limited effect on systematic environmental and political problems.  In the meantime, enjoy the video:

I was thinking about the impending return of the US Army from Iraq, and listening to one of the best anti-war songs ever.  “Hell Broke Luce” by Tom Waits.  Check it out below:

Yet, for some reason, it’s extremely difficult to find music that’s as driven and angry as that about the environment.  Why?  It’s  not for lack of severity of the issue.  Clearly, war and conflict bring death and misery to millions.  But so does environmental catastrophe.  In fact, as far back as 1994, Robert Kaplan argued that environmental scarcity, worsened in the coming years by population increases, rapid growth in consumption, and depleted resources, would lead to conflict.  More recently, the Center for a New American Security (CNAS), a security-based think tank in DC, echoed Kaplan, indicating that environmental and energy concerns should be a matter of top priority (PDF) given the emerging relationship between natural resources and warfare. 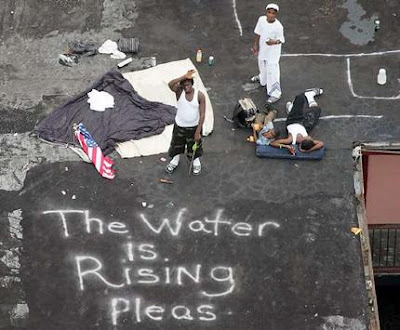 However, short of a slew of angry songs that came out directly in response to Hurricane Katrina (Public Enemy!), environmental music tends to be fairly tepid.  Don’t get me wrong – I like Joni Mitchell’s Big Yellow Taxi as much as the next guy, but I wish the environmental movement had songs that sounded less like polite missives and genteel observations, and more like anger about the current state of affairs.  (And Lord, do not get me started on the horror that is the Counting Crows version).  Indeed, given the link between environmental mismanagement and other sociopolitical areas that inspire fury – racism, classism, inequality – the lack of vehemence is even more surprising.  I’d love to be proven wrong, but so far, driven music is the exception, not the norm.

So, here are two of the exceptions: “DDT” by Suicide Machines (corporate greed and the promulgation of toxins) and “Countdown to Extinction” by Megadeth (rampant biodiversity loss).  Enjoy.