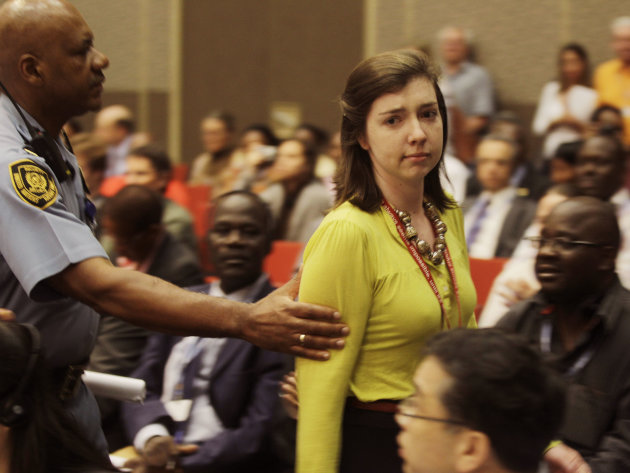 Abigail Borah: “The United States Government Does Not Speak on My Behalf”

In an inspiring display of bravery, Abigail Borah, class of 2013 of Middlebury College, spoke today against the politicization and gridlock of COP-17 of the UNFCCC. Here’s how it went down:  At the 7th meeting of the COP today, the various delegates walked through their national positions on climate change.  Two hours and twenty minutes in, the Greece Minister of Environment, George Papakonstantinou, just finished alluding darkly to the unwillingness of some Parties to commit to binding agreements, asserting that – even though Greece is in the midst of an economic crisis – such action is necessary.  The next presenter scheduled was Todd Stern, from the US Department of State.  Then, right before he could speak, this happened (skip ahead to 1:15):

While Borah was making her speech, the COP President attempted to shut her down, stating: “Thank you, can we listen to the speech?  Nobody is listening to you.”  However, this was belied by the fact that, right after she finished her speech (and Borah will now be banned from the rest of the conference), the audience of government delegates, press, and civil society representatives erupted in applause.  In response, the COP President tried to spin the situation: “Mr. Stern, this clapping is for you.  You have a very nice welcome now, so you can start.”

“I’m delighted that I have a very enthusiastic crowd here.  This is great.”

After Borah was ejected, Stern continued with his speech, reiterating comments made earlier in the week – the appropriate, and “only basis” on which climate change can move forward, is the Cancún Agreements.  Later today, in a press conference discussing environmental criticism (and mentioning Borah obliquely) Stern will repeat the idea that the US commitment to Cancún is sufficient as an approach to climate governance: “What is embedded in the Cancún Agreements is much more meaningful in terms of potential emissions reductions than what is in Kyoto; there is no contest.”

To this end, Stern cited actions such as the increase in CAFE standards, and the $90 billion invested in green energy under the Obama administration.  Further, in an attempt to burnish the US’s green credentials, Stern points out that a “leading environmentalist” – Dan Becker of the Safe Climate Campaign for the Auto Industry – described the move as “…the biggest single step that any nation has taken to cut global warming pollution.”  I covered the debate over the Cancún Agreements already, but suffice it to note that, accepting the US’ position that this would be the most appropriate basis for this current COP requires accepting that there would be no binding framework, which would 1) undermine the possibility of the conditional obligations of Cancún; 2) undermine the likelihood of extending the Clean Development Mechanism; 3) undermine the institutionalization of the Green Climate Fund, at a minimum – even though the US is vocally supportive of the GFC.  Indeed, today, Stern said that the US is committed to “promptly moving forward” on that front.

Granted, the CDM (and other flexibility mechanisms) are severely problematic – poor implementation and measurement may mean that countries receive credits for actions that were unnecessary, or double-counted.  You can see a report published today by CDM Watch on the problems of flexibility mechanisms here (PDF).  In short, loopholes currently mean that developed nations can meet their pledges primarily by “accounting tricks,” such as hot air, as indicated in the report.  Thus, being critical of the US’ position should always be tempered by the observation that binding regimes (such as the KP) are no guarantee of success.

In any case, the official US position is that 1) they have already made a proposal for a binding regime that was rejected by China; 2) the US is exercising political leadership, stating that: “It’s nonsense to suggest that what we’re doing is proposing a kind of hiatus to deal with climate change until 2020.  I’ve heard this everywhere from ministers, to press reports, to the very sincere and passionate young woman… I just wanted to be on the record saying that that’s just a mistake.  It’s not true.”

On the point of the CDM and the Cancún Agreement, the German NGO Forum on Environment and Development presented a synthetic study (PDF) on the commitments pledged last year indicating that “…the developed countries had put smaller pledges on the table than developing countries,” at a ratio of 5:4 GtCO2e.  This is severely problematic in that this is, in their words, “far out of line of what would be considered equitable,” and exacerbates the problem of the Emissions Gap, and the likelihood of a rise in temperature above 2 degrees C.

As a Caribbean, I thought about these discussions – the inequity between the rich and the poor nations; the remaining Emissions Gap (even with the most optimistic interpretation of the Cancún Agreements); climate responsibility – all of this, as I watched the somber presentation of the AOSIS members.  ” Citing the scientific information that is widely accepted in the conference, the Minister from Grenada stated: “You think that our countries are a paradise.  It’s a paradise when you come to visit, but for us, it’s a living reality.” It’s important to remember that, while climate change (and the mitigation effects of climate change) are likely to be very costly, for too many , climate change could lead to the erasure of an entire people – already, two South Pacific Islands in the state of Kiribati have disappeared beneath the waves.  The AOSIS delegate says he thinks it’s not too late.  I hope he’s right.