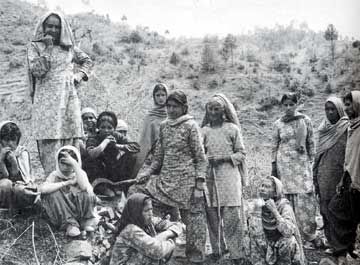 A lot of the news on environmental management and conservation tends to be pretty grim.  For those concerned about climate change, for example, continued political, corporate, and industrial resistance to the call for increased regulation is disheartening and frustrating.

But, there are examples of successful environmental movements.  One of those is the Chipko (lit: “tree hugger”) movement of India.  Very briefly, the 1970s and 1980s in India were characterized by state-sponsored development projects – that is, governmental sponsorship of infrastructure and extractive practices in the interest of economic growth.  In Uttar Pradesh, this meant rampant deforestation, legitimated by the Indian Forestry Department, for the production of commercial timber – used in paper, railway construction, sports goods, and so on.

Forests and the Environment

As most people are aware, deforestation carries with it, multiple environmental impacts.  First, and most obvious, is that forests are an important source of biodiversity, both by virtue of the diversity in flora species that make up a forest, and by virtue of their function as habitats.  According to UNEP, forests comprise 50% of terrestrial biodiversity.  Second, forest loss can contribute to other, attendant problems, such as land degradation: as trees are removed, soil becomes vulnerable to erosion, flooding, and landslides.  Third, as well recognized by the UNFCCC, forests can act as ‘carbon sinks,’ storing carbon dioxide, and preventing greater atmospheric accumulation of greenhouse gases.

But adding insult to injury, the quest for “national development” via deforestation and timber industries was socioeconomically inequitable.  The forests had served as a source of subsistence and silviculture for traditional communities living in the area.  Not only were they not incorporated into the aprovechamiento of benefits garnered by capitalist timber production, they lost access to traditional livelihoods when local agriculture,food production, and environmental security were overridden in the interest of commercial timber, as seen here (PDF).

But the residents of Uttar Pradesh were not helpless.  In an uplifting display of bravery and solidarity, local residents – primarily women – confronted timber interests using nonviolence.  They intervened between corporate-state interests and environmental degradation, literally inserting themselves between logging companies and the trees.  Hence the name Chipko – they hugged the trees.

From an environmental perspective, the end result was heartening.  There was a 15 year ban on commercial cutting in some areas; a moratorium on clear-felling in others, such as in the Western Ghats.  From a socioeconomic perspective as well, the movement was encouraging.  By sheer virtue of the fact that women were some of the primary drivers of Chipko, the movement emphasized the agency of women, and centered them as important actors in the politics of social resistance.   Further, as can be surmised, this also meant the privileging of local production in the shadow of inequitable and unsustainable capitalist expansion.  So, it can be done.  The fact that women, of a marginalized and disempowered traditional society, can confront unsustainable resource extraction – even when supported by government interests – should encourage us all to at as good environmental stewards.  Even if it’s difficult.