The Three Sisters Garden: Symbiosis Between Corn, Beans and Squash

Three Sisters Gardens allow for a thriving symbiotic relationship between their components: corn, beans, and squash. These three crops are and have been central to Native American agriculture and nutrition since the 1300s. Nutritionally, corn is a great source of carbohydrates, beans of protein and amino acids, and squash of vitamins. They were all foods that could be preserved by being dried, and thus eaten year-round, even if the growing period was limited. It was the Haudenosaunee (Iroquois) tribe, in the regions around the Great Lakes and Northeastern United States and Canada, that coined the term itself and according to Native American legend they are inseparable sisters that can only survive together. 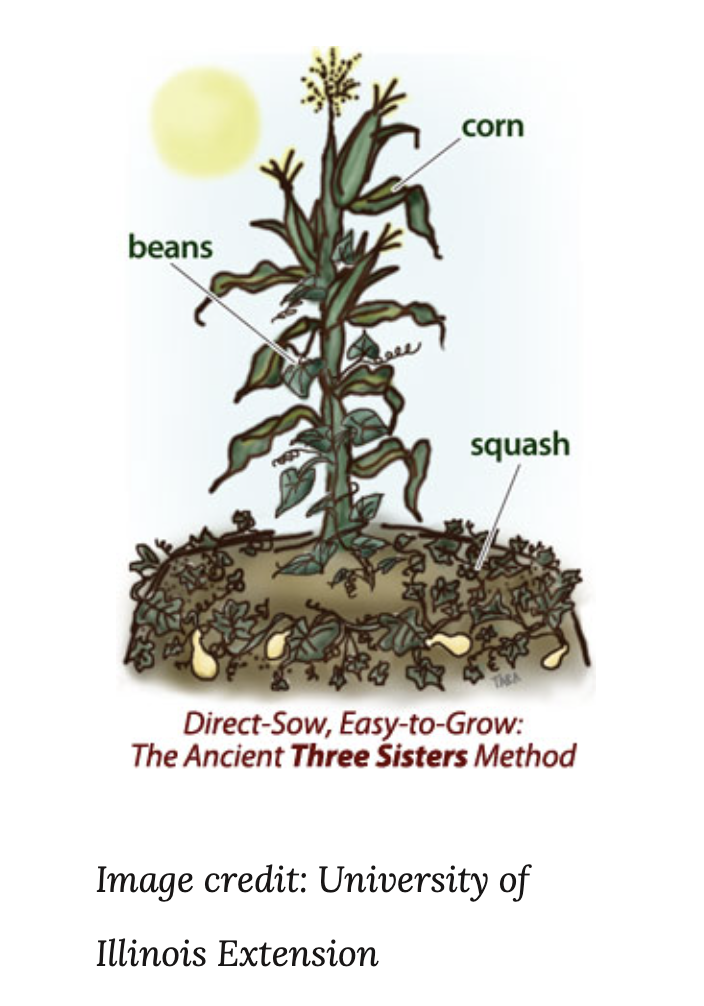 Tall corn stalks provide the vines on which the beans grow with a quick escape from the sprawling squash vines below, while the bean plant supplies the soil with much needed nitrogen and supports the corn stalks during heavy winds. The bean plant is capable of converting nitrogen from the air to a plant nutrient that can be absorbed by plant roots due to rhizobia located on their roots. Rhizobia itself, in this way, acts as a microsymbiont! See here if you want to delve into a more in depth explanation of its role and the process of nitrogen fixation.

The squash plant’s leaves, on the other hand, prevent the growth of weeds by shading the ground. This shade also heightens water retention for all three plants, while its prickly stems scare off animals looking to eat the beans and corn.

In some cultures, a fourth sister is often added to the mix, often sunflowers and amaranth because they provide much needed shade, crucial to counteract the heat of the southwest. They also aid the corn stalks by providing more tall stalks that the beans can climb and they attract pollinators.

Unfortunately for us here in Middlebury, these plants cannot tolerate frost, making the publish date of this blog post a bit ironic. Instead, they thrive in the warmest months of the year. However, in areas like the Southern Southwest in early summer, the high heat and low humidity can particularly harm corn’s tasseling period (30-70 days). So, corn is always planted first in order to avoid peak heat during growth and to allow for its stalks to grow above the other crops. For a step-by-step of preparation and planting, including a video, I would suggest this article.