Lives of the Most Excellent Painters, Sculptors, and Architects

A collection of biographies of famous artists written by Giorgio Vasari. Vasari was an Italian painter, architect, writer and historian. Lives of the Most Excellent Painters, Sculptors, and Architects has been called one of his most significant contributions because it is considered by most to be “the first important book of art history”(wikkipedia.org). Similar to Dante in Inferno, Vasari favorably describes Florentines’ contributions and developments in Renaissance art.

The Battle of Anghiari A Leonardo da Vinci painting, commonly referred to as the “lost Leonardo.” It is rumored that this unfinished painting is currently hidden behind Girorgio Vasari’s painting “Battle of Marciano in Val di Chiana.” In this painting, there is a Florentine soldier who waves a green flag painted with the words “cerca trova” (“he who seeks shall find”). Many believe this is a clue from Vasari that indicates that Leonardo’s lost work is behind his own painting in the Fall of Five Hundred in the Palazzo Vecchio. Scientists and art historians have carefully drilled holes and have determined that it is very possible that “the lost Leonardo” is behind Vasari’s painting. However, recently, Italy’s leading nature and arts conservation group asked Florentine authorities to halt their probing because they said it “risked harming the Vassari fresco and because they believed it was unlikely that the original Leonardo was there”(Lost Leonardo).

A set of islands belonging to Greece located in the Aegean Sea. As Dan Brown describes in his novel, Inferno, the Aegean Islands have specific coral caves which were ideal for early Grecian free divers who hunted lobsters (Brown 114). A “form of underwater diving that relies on a diver’s ability to hold his or her breath until resurfacing rather than on the use of […] scuba gear”(wikkipedia.org). Early humans started free-diving when they dove beneath the surface to hunt for fish. As for the history of free-diving for recreational purposes, “it is believed that Californian surfers witnessed free-diving in the Pacific Islands and  brought the sport back to the US” (History of Free Diving).  Brown uses an old adage from the Grecian free divers which is, “when swimming into a dark tunnel, there arrives a point of no return when you no longer have enough breath to double back. Your only choice is to swim forward into the unknown… and pray for an exit”(Brown). Therefore, like the Grecian free divers, Langdon must overcome his fear of being apprehended by Bruder and do anything to stop Zobrist’s plan. This quote especially resonates with Langdon as he has a fear of dark, enclosed spaces.

A “medieval stone closed-spandrel segmental arch bridge over the Arno River, in Florence, Italy, noted for still having shops built along it, as was once common”(wikkipedia.org). In Dan Brown’s novel, Inferno, Sienna and Professor Langdon are trying to reach the Ponte Vecchio because it leads away from the Boboli Gardens to the safety of the Palazzo Vecchio. At the Palazzo Vecchio, detection from Agent Bruder and his team will be much more difficult because there are many more people there than in the Boboli Gardens. Image:Ponte Vecchio 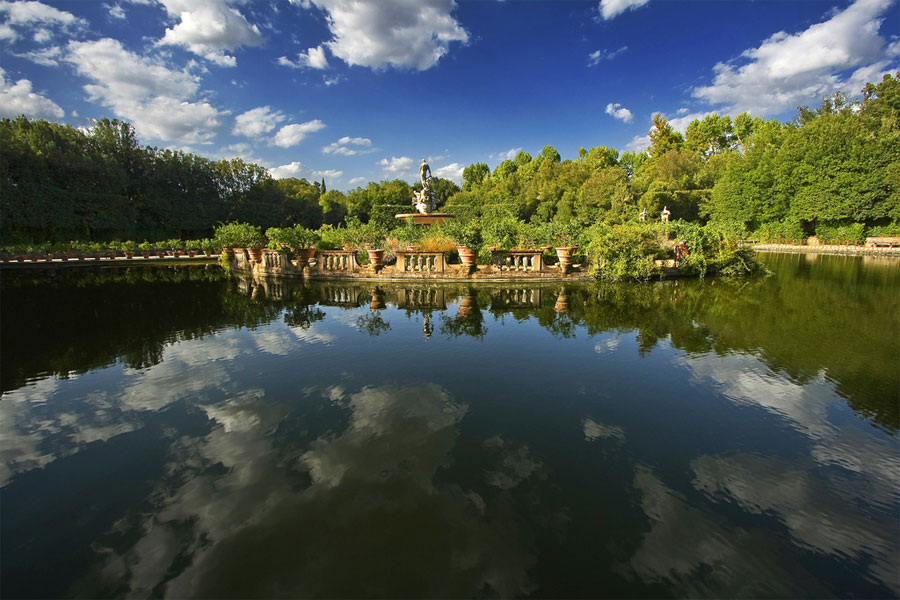 The Isolotto is a “moated oval-shaped garden surrounded by tall green hedges” within the Boboli Gardens. The Gardens are located behind the Pitti Palace which is an enormous Renaissance palace. The Pitti Palace has housed some of the most powerful Italian people. In the center of the Isolotto, there is a “small island connected with two bridges which are emphasized by elegant gates.” The centerpiece is a replica of Giambologna’s Ocean Fountain created in the year of 1576. In the Isolotto, there is a lagoon, with a statue of Perseus riding upon a half submerged horse. Due to this famous sculpture, Langdon recognizes the Isolotto, remembers its location in the Boboli Gardens (southeastern side of the gardens), and immediately realizes that they have to head away from the Isolotto and towards the Viottolone if they want to reach the Pitti Palace. The Isolotto-florenceinfo.com. Image: Isolotto

Also known as the “Cyprus Alley,” the Viottolone runs “east-west along the entire length of the grounds” (Brown) and is a path behind the Pitti Palace. The Viottolone is “lined with double rows of Cyprus and laurel trees and is decorated with various statues” ( The Viottolone). As Sienna mentions, this specific walkway is extremely open with no possible cover from the drone attempting to track their progress through the Boboli Gardens. Cerchiata means “arbor made of branches of trees bent as an arc”(Florenceinferno.com). The trees are curved to create an archway all throughout the garden path. The arbor was planted approximately in 1612. The covered archway was made by “planting trees in rows to shade the garden paths, then the branches were bent around curved supports and a structure of chestnut wood stakes (Filardi 105) (Making of La Cerchiata).” Due to the construction of La Cerchiata, Sienna and Professor Langdon have more cover as they attempt to reach the Ponte Vecchio and Pitti Palace. Image: La Cerchiata